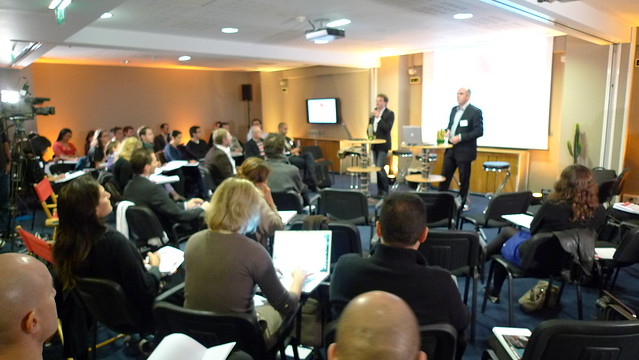 I’d like to propose an alternative to the typical conference model. Chris Wejr got me thinking after he sent me a message suggesting that we host a conference sometime in 2013 that he called a ‘hybrid conference’ and this post by John Burk also influenced my thinking as well.

Some of the problems with a typical conference for many people are:

The best parts of a conference (in my experience) are:

First, we would assign people to cohorts (based on their interests, or on questions they answer during registration) after they register, and setting up email lists (since most people are more comfortable with email than with other social media, and it would automatically provide records of the partiicpant conversations) for those cohorts, along with a facilitator for each cohort. The job of the facilitator is to provide information to the cohort about the conference coming up, and to encourage conversation and introductions between participants before the conference. These cohorts would also be sent links to video presentations (which should be broken into small chunks and include searchable transcripts of the video) that they can watch in advance of attending the conference. Ideally, presenters would be part of these cohorts.

The people would then attend the conference, and potentially move around through their sessions (which would have to be scheduled in advance, like a typical conference, but with input from the registrations) as a cohort, with sufficient opportunities during the sessions to connect and discuss the ideas, or at least between sessions. Ideally each session would be run more like a workshop, rather than a lecture, since most (if not all) of the people in the cohort would have already listened to the presentation. In some of the more advanced sessions, participants would produce a product as a result of their time together.

Social media could be used during the presentation as a back-channel, so that people from outside of the conference could learn from the participants, and share their ideas back to the conference.

Naturally, most participants attending the conference would know some other people there. They would have conversations, and they could choose to eat together. Obviously, if one wanted to continue through the conference as a solo participant, this would still be supported by this model, one would just choose not to interact with their given cohort.

After the conference, the cohort email lists could be used for follow-up, as well as other social media. People would be expected to continue to ask questions and discuss ideas, as well as share their successes (and failures) back to the group after attempting to implement whatever strategies, techniques, or resources they learned about through the conference. Provided the participants made the effort to seek follow-up, they would have an avenue to receive it.

It would definitely require more work from participants than is typically expected for a conference, and I’m sure this would turn some people away from attending this conference. That being said, those people I think rarely get very much out of typical conferences anyway, and I’d rather not build a new conference model based on the lowest common denominator.

Do you see any flaws with this model? Can you think of any ways of improving it?