My uncle called me today, and asked me a math question. Normally, I get called and asked technology related questions, but occasionally people remember that I have a mathematics background and call me in to assist.

My aunt wants to build a raised garden bed with a very particular shape. My uncle has been tasked with building it. She wants 3 of the sides of the shape to be 4 feet long, and the 4th side to be three feet long, and the whole shape should form a trapezoid (with a line of symmetry down the middle of the trapezoid). It took a little bit of chatting on the phone to get this to be clear, and I can see how being able to send each other pictures would have been really useful. To be able to build this shape as accurately as he would like, he needs to know all of the angles of the shape, so he can cut the pieces of the wood with the angles in the right position using a miter saw. 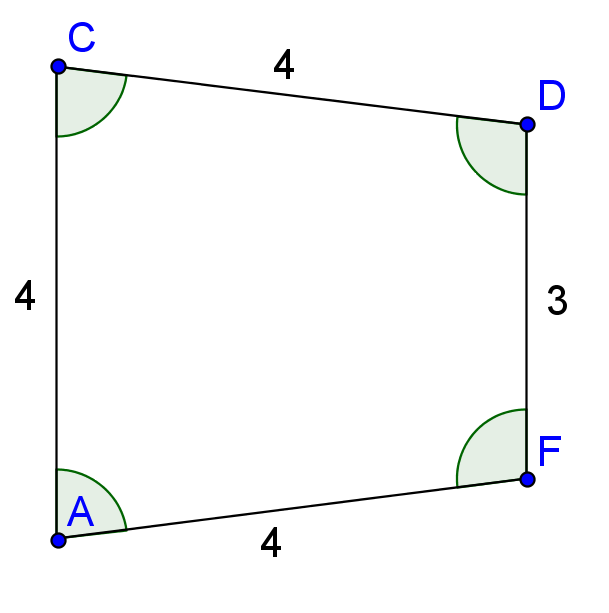 I looked at the shape and decided that the fastest solution would be to build the shape in Geogebra, and measure the angles, which resulted in this. 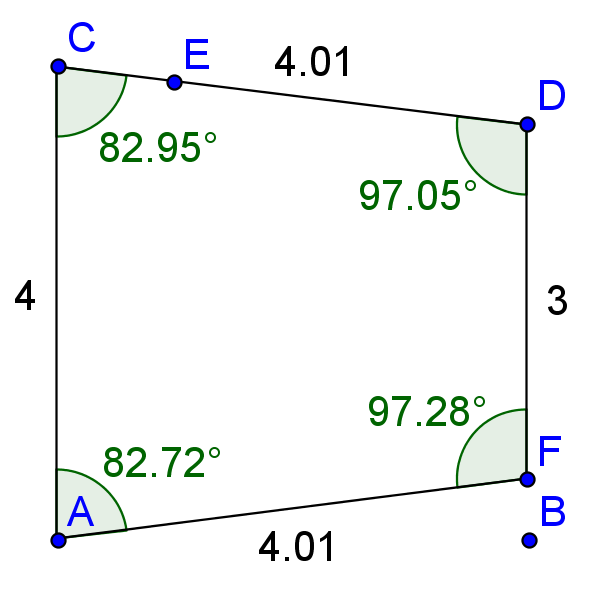 Not the exact solution, but close enough that my uncle would be able to use the miter saw (which has a maximum accuracy of 1 degree, according to my uncle) and cut the wood for his shape. It took me about 3 or 4 minutes to draw the shape in Geogebra and measure the angles.

After my phone call with my uncle was over, I decided that I should double check this solution though, and verify that I knew how to solve it.

I drew an imaginary line across the shape, and labelled that side x. This allowed me to create a pair of equations using the Cosine law, and I ended up with the following equation to solve:

and finally leads to this calculation:

On my calculator, that leads to a value of the smaller angle of about 82.8° and a larger angle of 97.2°, which means that my diagram that I drew for my uncle is fairly close. Wanting to be sure that my answer was correct, I also checked it using Wolfram Alpha, and on my graphing calculator.

After I told my uncle the solution, he told me that my aunt had suggested drawing the diagram carefully on a piece of paper and measuring the angles with a protractor, but he had complained that solution wasn’t "mathematical enough." Of course, this leads to a discussion of what it means to do mathematics, anyway.

Does it matter which way I solve this problem for my uncle? Which of these techniques would you classify as "mathematics"? All of them? None of them?