I’ve been playing with paper folding recently, and exploring the mathematics involved. I’m simply amazed by the number of mathematical ideas that can be represented by paper folding, so I thought I would share a few of my discoveries here. 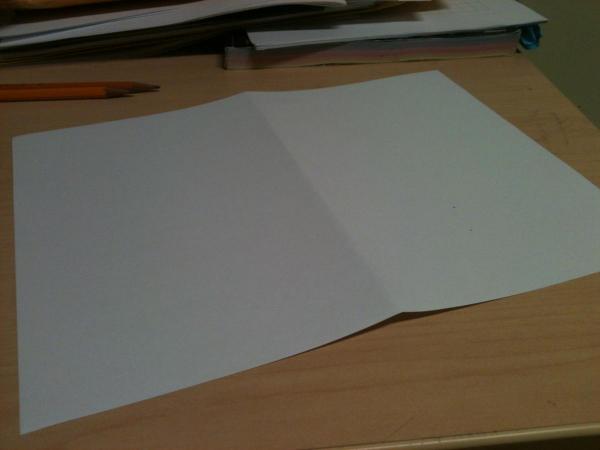 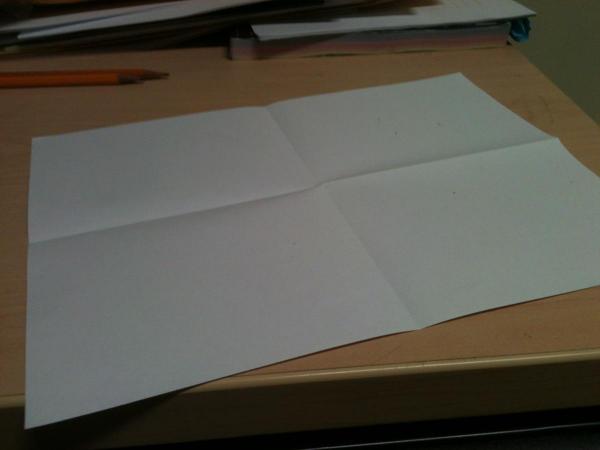 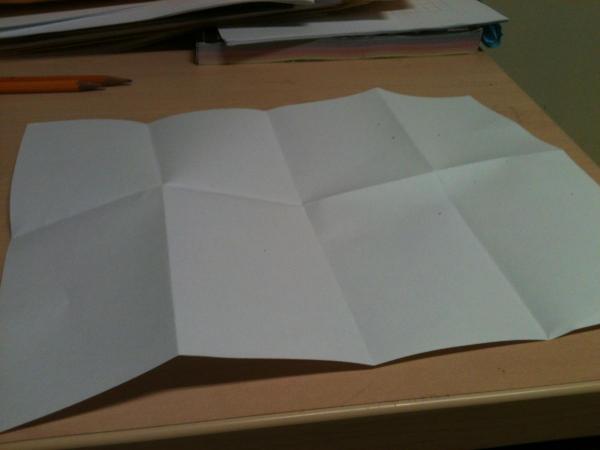 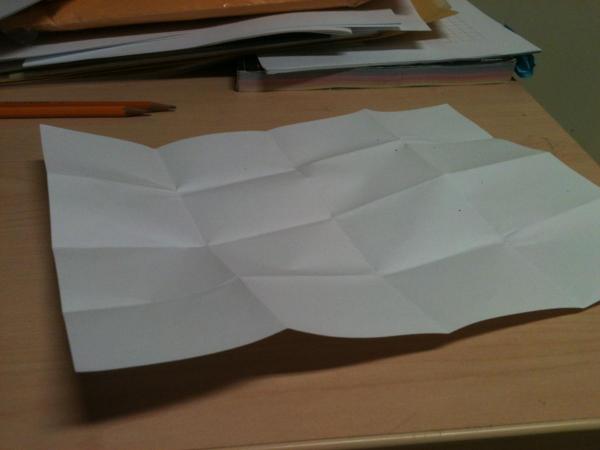 As you can see above, you can generate the sequence of numbers 1, 2, 4, 8, 16, 32 and so on, just by folding the paper in half again each time. This means that there is an exponential relationship between the number of folds you have made and the number of areas created on the paper. 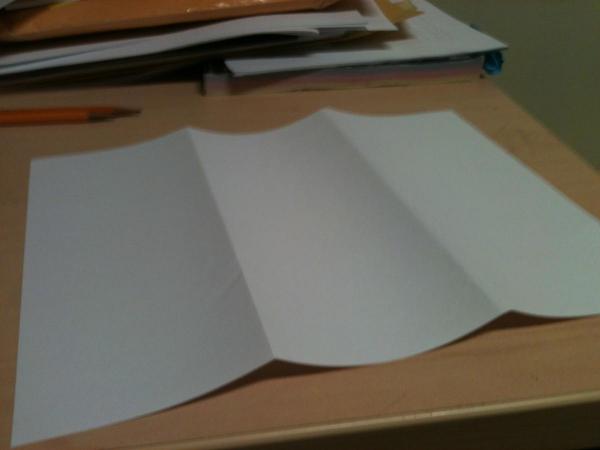 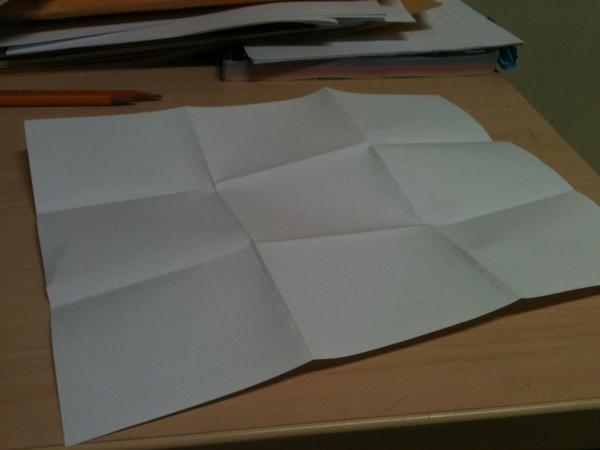 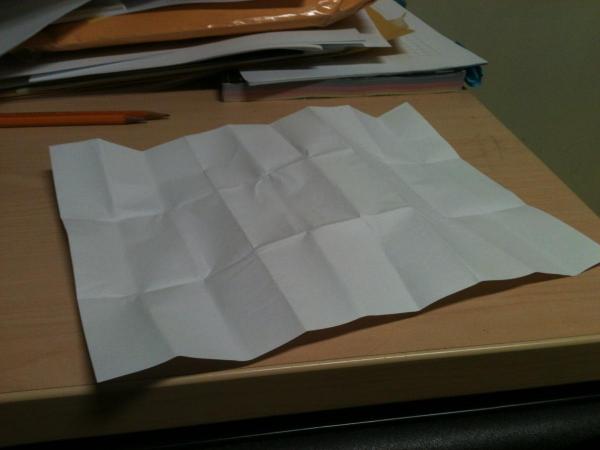 Notice that if I instead fold the paper into thirds each time, the sequence changes into 1, 3, 9, 27, etc… which suggests that folding a piece of paper is a little bit like multiplication. 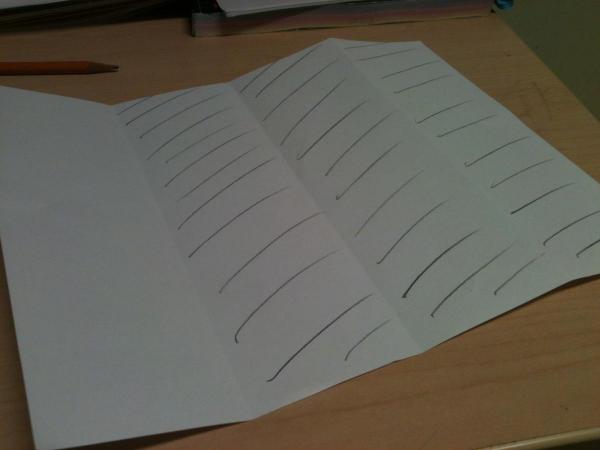 by folding the paper into quarters and shading three of them in. 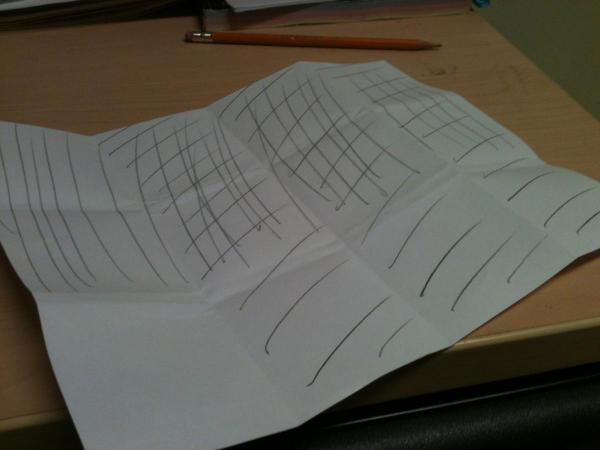 Now fold the paper in the other direction into thirds, and shade

, ideally in the other direction. Where your two shadings have overlapped is the product of your two fractions, in this case 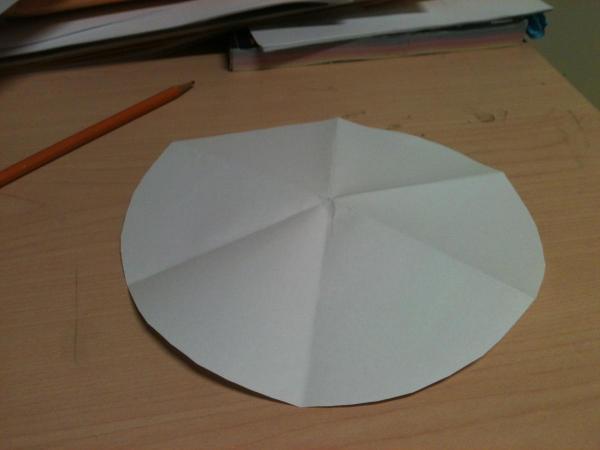 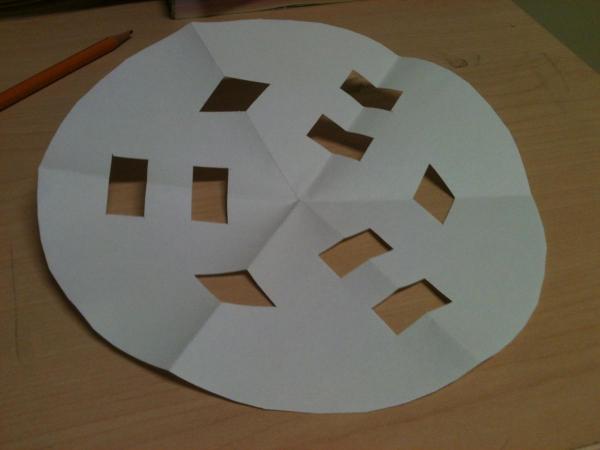 Here is an example of folding the paper around the centre to produce rotational symmetry. I worked with a student to produce snowflakes with  9 points, 12 points, and other points, after watching this interesting video by Vi Hart. 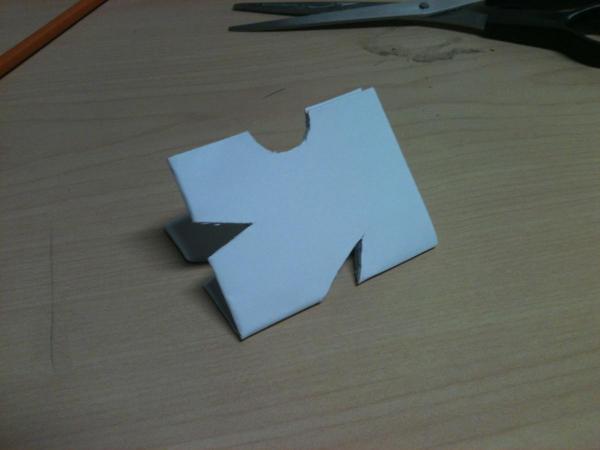 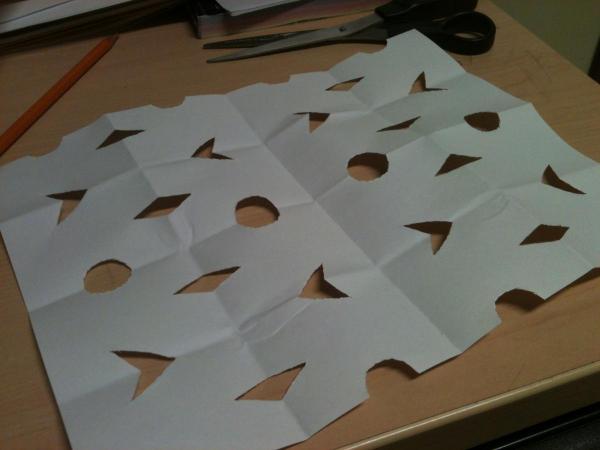 If you fold a paper in half a bunch of times, you can create a tesselation by cutting portions of the paper out. The number of folds and the size of the repeated portion of the tessellation have an interesting relationship. 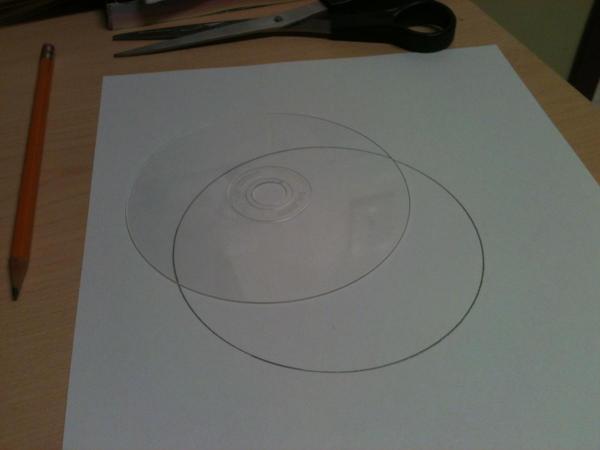 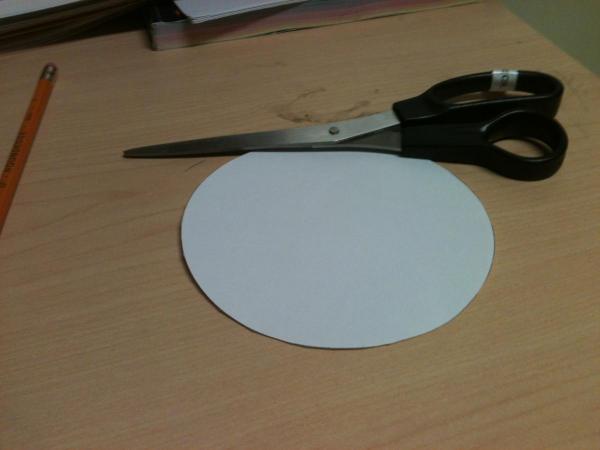 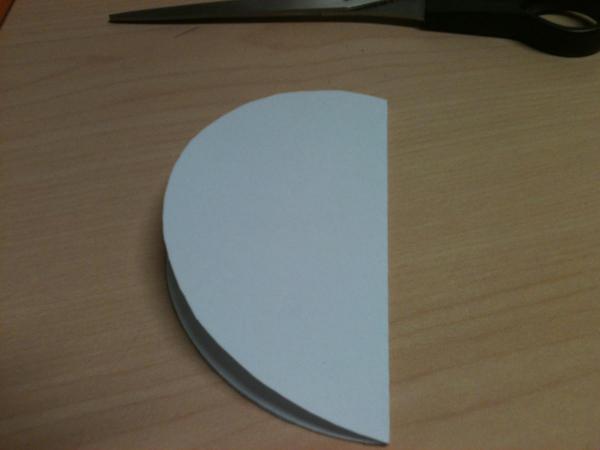 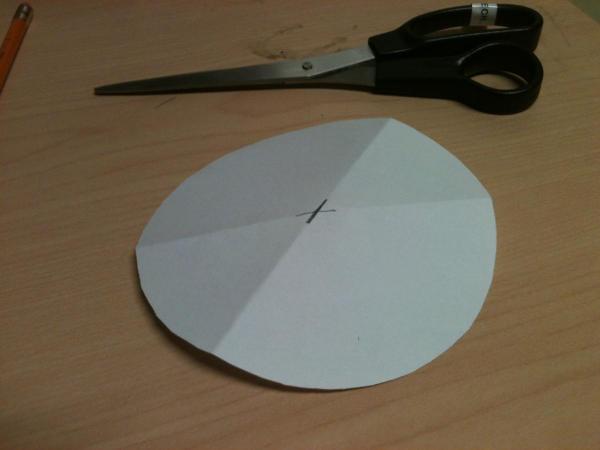 If you very carefully cut a circle out of a piece of paper (which will finally give you a use for all of those CDs you have laying around you aren’t using anymore), you can prove quite a large number of the theorems from circle geometry by folding the paper in certain ways.

For example, if you fold the paper in half twice in two different directions, the intersection of the folds has a useful property.

For further resources on paper folding and mathematics, see this TED talk by Robert Lang, this book on the mathematics of paper-folding, and this useful PDF describing some geometry theorems that can be demonstrated through paper folding. See also this very interesting article on fraction flags (via @DwyerTeacher). 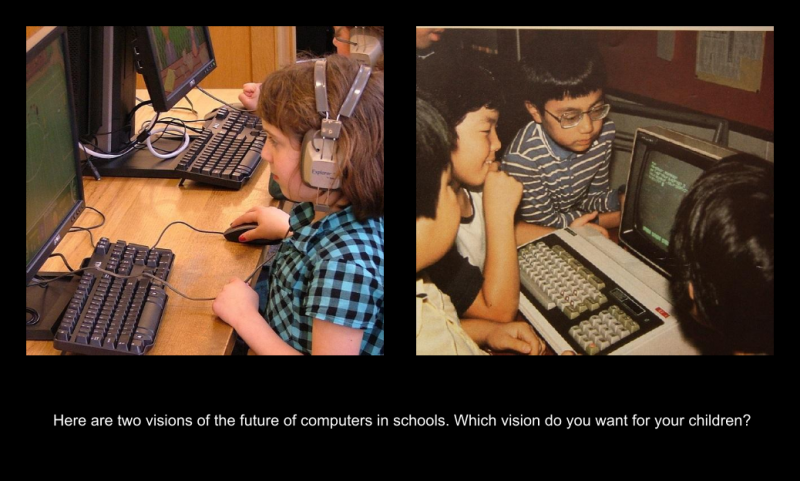 If you ask people who attempt to predict the future of education, you will find out quickly that there are two very different, competing perspectives.

One camp believes that the future of education is in moving away from complete standardization of curriculum and focusing on nurturing students to become learners, so that when they need to learn something new, they are capable of doing so independently. They are less concerned with the media that students use to learn, and more concerned about ensuring that students have at least some say in what they learn, and how they learn it. They believe that computers are powerful devices for exploration, and that the full potential of computers in education has not yet been realized.

This first camp believes that learning is something best done within social contexts, while simultaneously believing that cultivating the ability to think independently of others is of critical importance in our life. They believe in students spending some time learning independently through self-exploration, and some time collaborating deeply with others. They believe in teaching kids how to think, not what to think. They believe the role of teachers is primarily to mentor students and to model being a learner with them.

This second camp believes that the future of learning is with children carefully isolated, sitting in cubicles, watching videos, and then answering questions prompted on the screen. They believe that social interaction with other children is at best a supplement to what happens on the computer, and at worst it is a distraction. This camp is usually more concerned with the cost of education than the quality of learning.

I’ve been working on improving ActivePrompt, and I decided to split it off to it’s own domain. This script was originally created by Riley Lark, and I’ve been working on my own fork of his project. The new site needs some serious work on the appearance (interested in helping? Let me know), but the functionality seems pretty solid.

If you created prompts, they still exist, but they are not currently attributed to you. Please create an account on ActivePrompt, and email me and I’ll try and link you to your prompts manually. Include in this email: