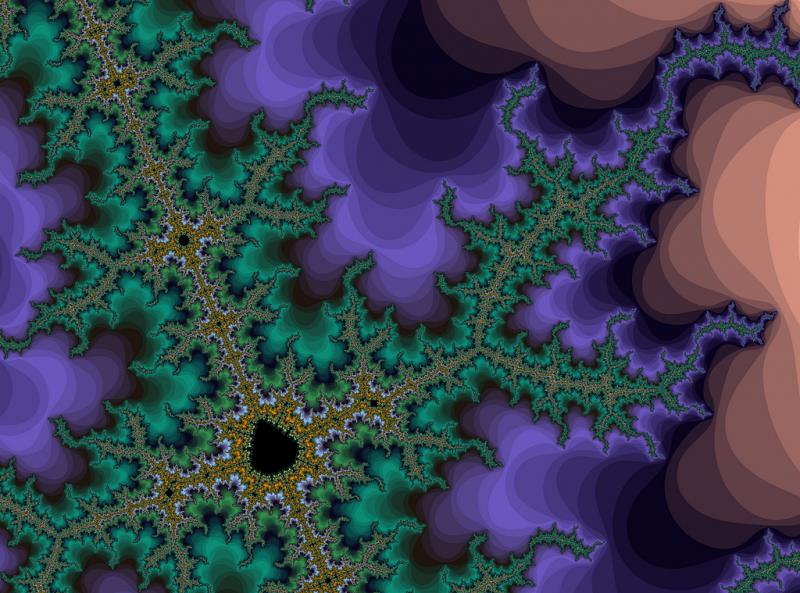 Some alternate definitions of common technology:

I’ve been thinking about what I think a truly great mathematics education website would look like. Dan and David have produced some awesome mock-ups of the future of mathematics textbooks, and I love their work, but I can think of more features I would add.

I can imagine that trying to introduce this all at once might be overwhelming or too challenging, so these features would have to be introduced over-time, but the ability for students to connect with each other to have discussions about mathematics would have to be front and centre from the very beginning.

What other features would you include? 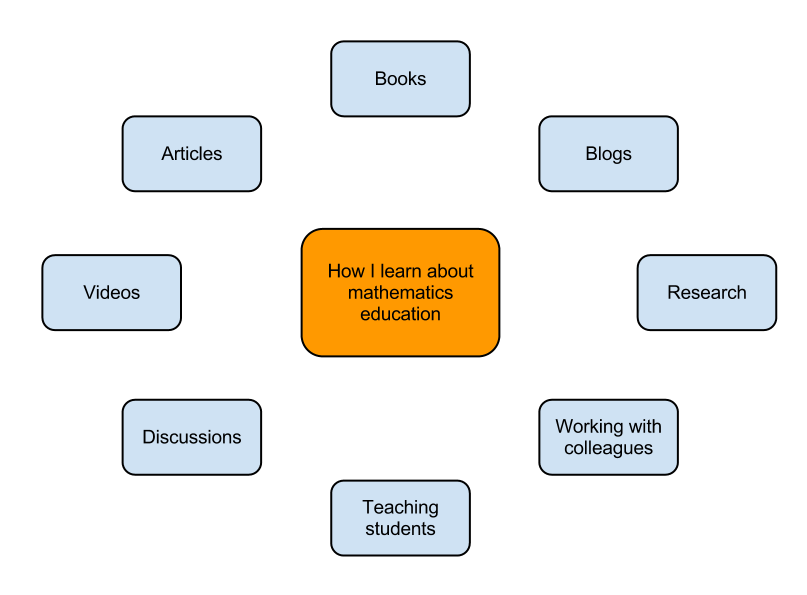 I’ve noticed that my experiences in #etmooc very much parallel my learning experiences on a regular basis, except that they are now branded and slightly more focused on a different topic – connected learning.

PS. I know that people complain about not having the time to participate, which I get. I’m busy too. I have to balance my desire to learn more against my family life as well, and lately, family life has been winning, but I always carve out some time each to learn a little bit more about my field each day. I couldn’t give up learning more about education any more than I could give up breathing.

This level of engagement and thinking has got to make a difference on my understanding of education, and at least indirectly on my skill as a teacher. When I say that blogging has made me a better teacher, I mean it.

The future of learning

A few years ago, as an assignment for my Master’s degree, I created a video on the future of learning. I was never very happy with the quality of the final product, nor do I completely agree now with the vision I presented then. That being said, here are some of the slides I used. It looks like some of the text in the comics is uncited, but I have citations near the end of the video I created.

Some of the slides below offer some ideas as to how technology may change how we learn in the future. Some offer quotes from other thinkers in the field, in case you want to explore more.

Perhaps this is part of the reason that so many education reforms that are attempted fail so badly? Could it be that at least some of the people involved in education reform are just so completely inept that they are not even able to judge their own performance at all?

The good news is, if you know you are bad at something, then at least you are not completely inept, because if you were, you might think you were good at it. The bad news is, people who are completely inept are unable to judge or recognize their ineptness, which may make them push ahead in ways which are harmful to the rest of us.

Learning outside of school

I realized that I have done a lot of learning outside of school as a kid. Here are some examples.

I’m not offering this list to brag about my childhood, but simply to suggest that there are plenty of ways kids can learn outside of school, but they must have the time, space, and support to do so.

I covered a couple of my colleague’s classes yesterday so he could attend a math conference. The afternoon class was a somewhat boisterous grade 10 group. I was asked to teach students how to find the greatest common factor, and if I had time, introduce them to more general factoring techniques.

I decided that the greatest common factor is a topic students find relatively easy, and so I just showed some examples of how to do it (actually, I drew the "how to" out of the class by asking them questions, but this is my standard technique) after verifying that they understood the distributive principle. I then assigned some practice problems, which then each student wrote their solution up on the board, and we discussed. I then showed students a couple of different techniques for multiplying binomials (like (x+2)(x+3) for example).

Next, I put up the following 4 questions.

I asked students to try and figure out how to write these expressions as one set of brackets times another, just like with the example from before, but I suggested to them that what we are trying to do is undo the distributive rule.

I went around the room and encouraged students, gave them hints when they needed them, asked them questions to prod their thinking, and observed their problem solving strategies. Students were engaged in the problem solving activity for a good 30 minutes. Once some of the students’ attentions started to wane a bit, I gave them a sheet with a description of how to do factoring by grouping and some problems to work on the back.

A group of students though really dove into question 4, which, as you may notice is actually quite a bit more difficult than the other three problems. I ended up having to give students two hints: I told them that the expression broke into two factors, one of which was (x+2) and the other of which was three terms long. The group of students worked feverishly on solving the 4th problem for a good twenty minutes, and then all of a sudden, one of the girls in the group leapt out of her seat and screamed, "I GOT IT!! YES!!" I circled around to see if she had the right answer, asked her how she was so sure it was right (she had multiplied everything back through using the distributive rule), and then gave her group x3+27 to solve (which she did quickly) and then x3 + a3 to solve.

At 5:30pm that night, I received an email from the girl, excitedly telling me how she had an inspiration while she was on the bus home on how to solve the general question, and had then figured out the general formula for how to factor a sum of cubes.

I emailed her back and congratulated her on becoming a mathematician.

I played ultimate tonight, and we usually keep score with shoes. Our normal scoring system is to count in base 5. Tonight, I tried to use binary, but at half-time I switched back to base 5 when most of our team struggled to read our score quickly.

I took some pictures of the arrangement of shoes during the game (when I wasn’t playing). 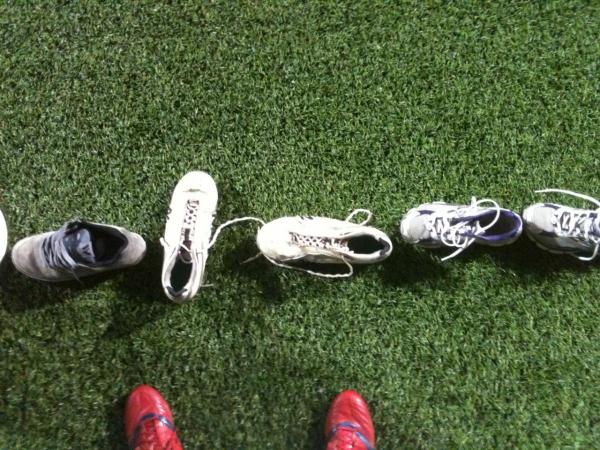 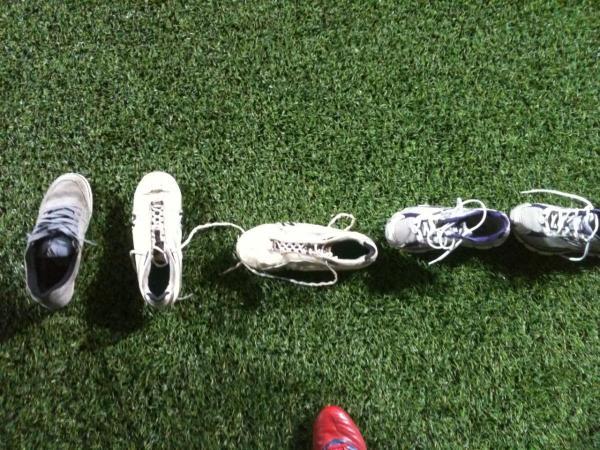 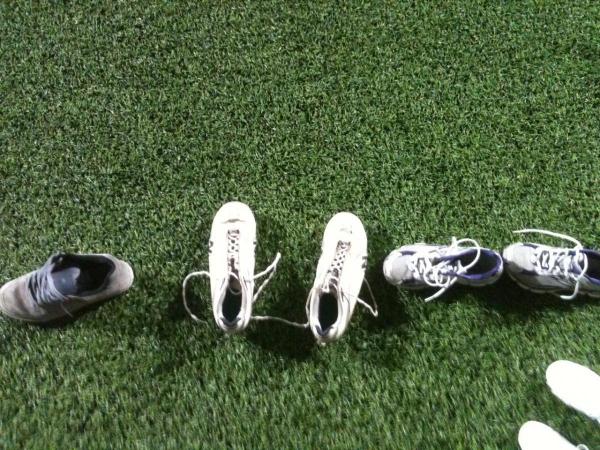 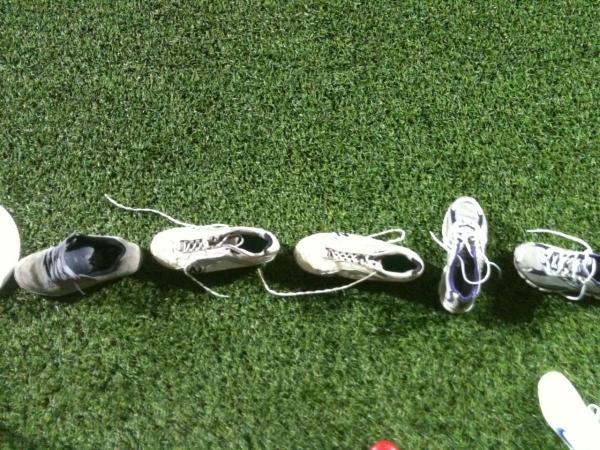 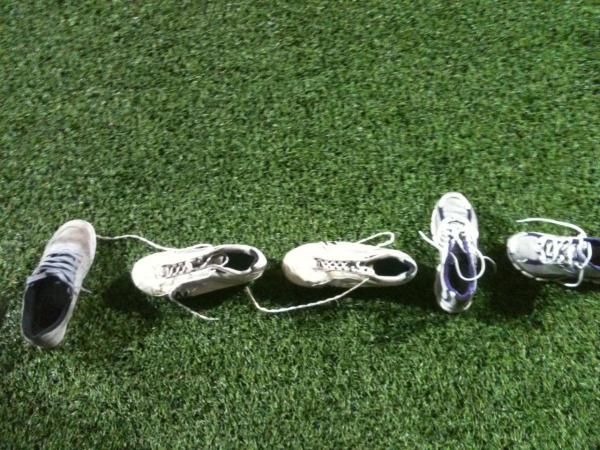 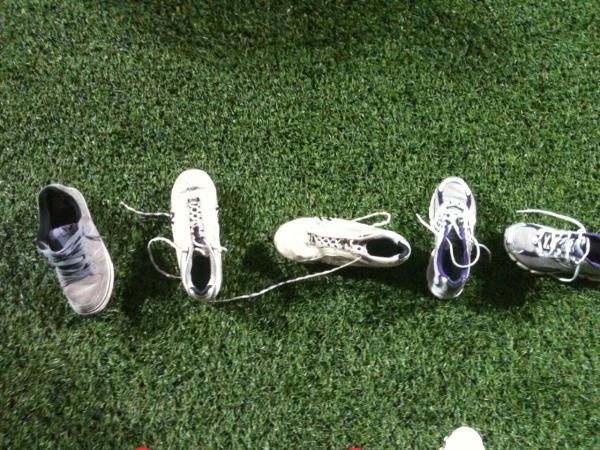 I can imagine some investigations could be made out of these photos.

If you want a project that might take a while: