Disguising flash cards as a game is deceptive

I’m reading The Connected Family by Seymour Papert, and ran into a quote which I found appropriate.

"…learning multiplication facts by putting flash cards on the screen is not a new way of learning math. It is a polished-up version of the old ways and promotes to greater heights their worst and most mechanical features. Moreover it is often done in a spirit which I see as dangerously dishonest: Disguising [emphasis mine] flash cards as a game introduces an element of deception that undermines two fundamental educational principles.

First, learning works best when the learner is a willing and conscious participant. Second, deception and dishonesty in the teaching process make a mockery of the idea that schools should develop moral values as well as knowledge of math or history." ~ Seymour Papert, p19, The Connected Family, 1996

It was timely, because just this morning, I saw this tweet from Jason Klein:

Just searching now on my iPhone for math in the App Store, these apps showed up. 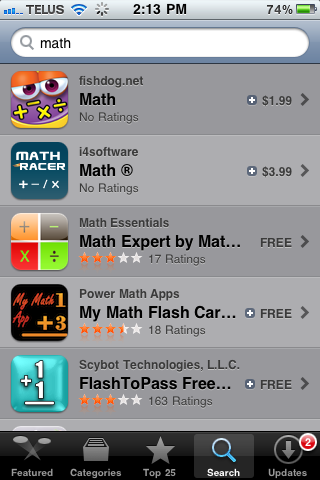 All five of these applications are based on learning math facts and arithmetic, and two of them even have the word "flash" in their name. Of the top twenty five math applications that I saw, 23 of them are essentially flash cards disguised as games. Two of them aren’t, one is called "Equation Genius" (it solves algebra equations), the other is called "Motion Math" (which lets students learn the relationship between fraction as symbols and visual representations of those fractions).

Could we please get more educators programming these apps? (If someone would donate me a Mac to work on, I’ll happily do it myself.)

Heading to the Computer Based Math conference in London, England