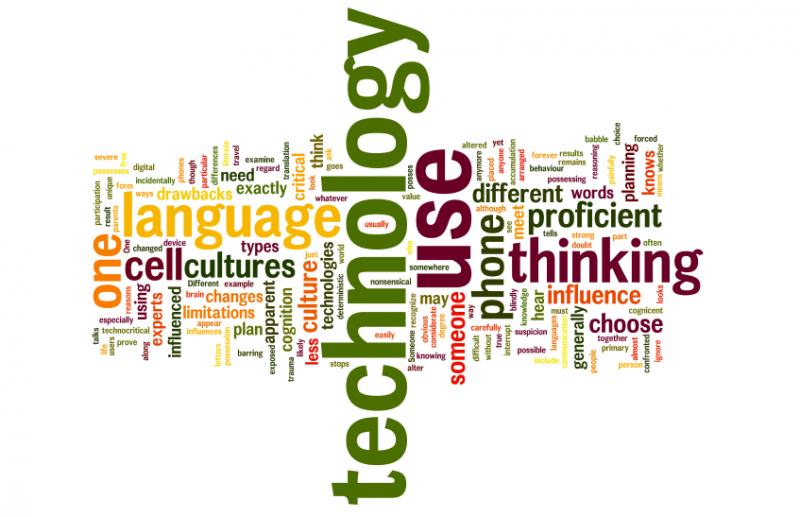 That technology can influence cognition should be painfully obvious when you examine our primary technology of communication – language. Someone who knows a language cannot choose to ignore that language when confronted with it. If you are a literate person, letters arranged together do not appear randomly placed, they form words. When someone talks, you cannot hear it as babble, you are forced by how this technology has influenced your thinking to hear words.

When one looks at language, it is nonsensical to ask if one has a choice whether or not to use this technology. Once proficient in a language, barring a severe brain trauma, one remains proficient in that language and has it forever more alter their thinking. You can’t choose not to use a language once you have it and are exposed to it anymore than you can choose your parents.

Different languages and the accumulation of culture (another technology) that goes along with them result in different ways of thinking. One of the reasons why translation is so difficult between cultures is because quite often cultures have concepts which are unique only to their culture, which tells us that differences in the technology of culture results in different types of thinking. In the same way, people who are proficient in digital cultures have their own thinking altered by their participation in those cultures.

It is possible that there are technologies which do not influence our cognition. It may be, for example, that we are not influenced by our cell phones (which incidentally, whatever their value may be, a device which allows almost anyone in the world to interrupt you no matter what you are doing) to the degree that they influence our thinking.

I do not think this is true though. When you look at cell phone use in particular, you will no doubt recognize that possession of a cell phone and knowledge in its use means that if you are planning to meet someone else, who also posses a cell phone and knows how to use it, you are less likely to carefully plan exactly when and where you will meet them. So just possessing and knowing how to use a cell phone changes your behaviour, and changes how you plan your life. If one possesses a smart phone, and are at all proficient in its use, one generally stops planning exactly how one will travel somewhere in advance.

My strong suspicion, although I cannot yet prove this, is that all technologies include different types of thinking which are a necessary part of using the technology, and that while the influences of technology are not deterministic — we have some free will in our use of technology, I do not think that someone who is not cognicent of the limitations of their technology will see those limitations.

The benefits of technology use are generally easily apparent. What are usually less apparent are the drawbacks. So instead of blindly using technology without regard to the potential drawbacks, we need to be considerate of its use, and be critical of how it has changed us. We need to be technocritical as users, and those of us who are experts in technology use must especially be experts in critical reasoning around its use.