My colleague found an activity to do with his 5th grade class, similar to this one. Basically, he gave the students 10 coins each, and asked them to put the 10 coins on a number line (with numbers from 1 to 12) with a partner. Each round they roll 2 six-sided dice, find the total, and remove a coin from their number line if it matches the roll. They keep going until one of the two students has no coins on the number line.

At first, most student’s starting positions looked like this: 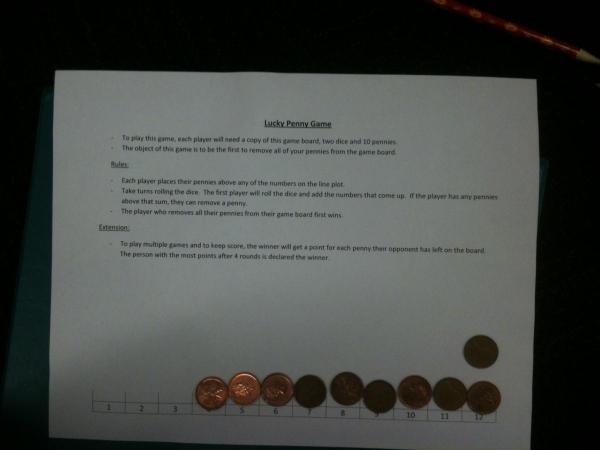 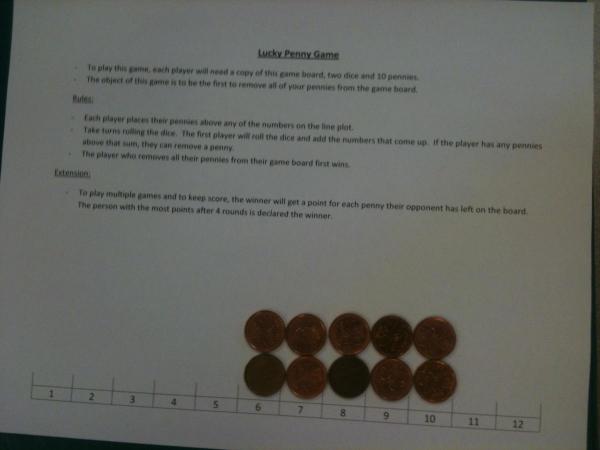 At the end of the lesson, we played a 5 coin version of the game, and one student’s paper (after 1 round) looked like this: 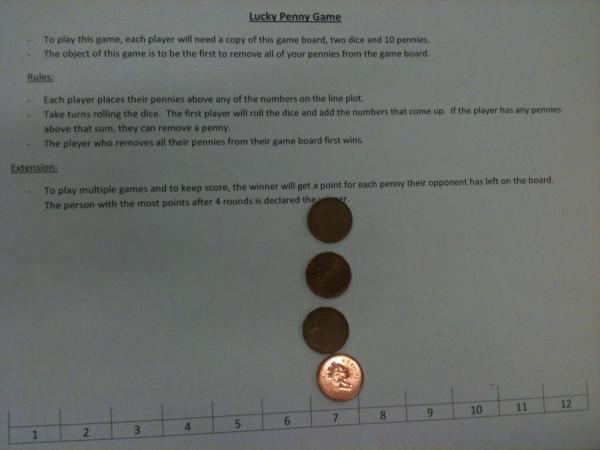 Unfortunately, although most of the students did notice that some numbers came up more frequently than others, as evident by their distributions looking a bit less flat, and bit more centred on 7 on the number line, many of the students still had obvious misconceptions of probabilty. Students made comments like:

"If I spin around twice before rolling, I get a more lucky roll."

"I need to spread out my numbers so I have more chance of getting a coin taken on each roll."

Our plan for next class is to have students switch up groups, discuss insights they’ve had on the game, play a couple of rounds, switch them up again, while we walk around and see what strategies they use. Hopefully we’ll see less students spinning around in order to improve their dice luck…

I also asked for resources on Twitter for using a probability game as part of a lesson on probability, and had the following 5 games recommended (all of these look good because they are relatively easily produced and used in an elementary school classroom).

I wrote a simulation to test to see what distribution of coins is the best. I am somewhat surprised by the results. Check it out here.

Why am I surprised by the results? My intuition about how this game works failed me. I thought that the likelihood of each number coming up was the most important factor in deciding a good strategy for the game. It turns out that one has to balance out the knowledge of the likelihood of each number being rolled with having a selection of numbers available. It may be that the probability of a 7 being rolled is 6/36 but the probability of a 6 or a 7 being rolled is 11/36.

In fact, it turns out that having a selection of different rolls available is fairly important. I updated the simulation so I could choose the number of coins to place, and with 3 coins placed, choosing 4, 5, 6 is better than having all three coins on the number 7.  With 2 coins, it is better to choose 6 and 8 than to put both of the coins on 7 (although 6, 7 is better than 6, 8 – but only slightly).

There are three messages I get from running this simulation.

Paulo Freire reflects on his life