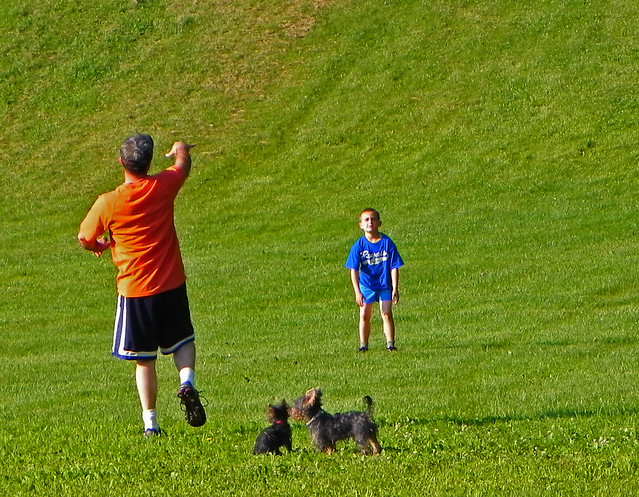 I co-coached my son’s blastball team last year. We spent a lot of time playing blastball, but we also spent some time practicing some of the skills needed to be able to play (while emphasizing how these skills fit into playing the game). One of the skills we practiced was throwing and catching a blastball.

How this worked is that each kid stood one or two steps away from their parent and threw the ball to their parent. If the parent caught it, the parent took a step back, and threw the ball back to their child. If their child caught it, the parent took another step back, and so on. This meant that very quickly parents and children tended to be separated by a distance where they catch the ball about half of the time. This is by itself a good activity that relates to the number line, if you think of each step apart being 1 space apart on the number line.

My son and I went through a particular fun exchange where his objective was to make sure I didn’t catch the ball, requiring me to continue closer to him. As I moved closer to him, I kept indicating where I was like so: "Okay, now I am three steps. Now I am at two steps." Eventually, I ended up zero steps away from him. To continue the joke, he managed to find a way for me not to catch the ball even though we were directly on top of each other. I continued stepping toward him, which meant that we were now facing back to back, with one step in between us. "Okay," I said, "now I am at negative one step." He had lots of questions about negative one step, and continued the game a few more times as I moved into smaller and smaller negative numbers.

While the introduction of the concept of negative numbers is obviously secondary to this activity, it is a way to tie together some fun physical activity with some conceptual understanding of the relationships between different numbers.