The Math Emporium – The Walmart of Higher Education 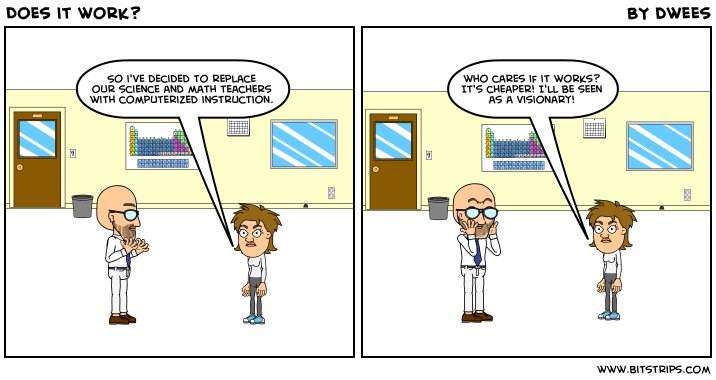 I recently learned of a massive project at Virginia Tech called the Math Emporium. Here’s a quote from the original article.

The Emporium is the Wal-Mart of higher education, a triumph in economy of scale and a glimpse at a possible future of computer-led learning. Eight thousand students a year take introductory math in a space that once housed a discount department store. Four math instructors, none of them professors, lead seven courses with enrollments of 200 to 2,000. Students walk to class through a shopping mall, past a health club and a tanning salon, as ambient Muzak plays. – Daniel de Vise

Students sit down at computer terminals and read mathematics lessons, and then take quizzes based on those lessons. The idea is compelling for those wishing to reduce the cost of higher education, because if you can successful replace people with computers to teach the classes, you don’t have to worry about benefits, salaries, and other major expenses of a university. According to the article graduation rates for the introductory courses are up, and costs are way down, as the Emporium is almost 1/3 cheaper than the previous model used at Virginia Tech.

So what do the students think? I was recently given a link to a public Facebook page where Virginia Tech staff had linked to the story.I took some screenshots of what a (probably biased) sample of the students think of the Math Emporium, just in case Virginia Tech ever decides to remove the public feedback they got on their Emporium. Here are some quotes from that page.

“How about being taught in actual classrooms… The concept that the Empo improves anything is an outright joke. It’s horrendous that I have to pay exorbitant amounts of money so I can take 30 minute bus rides to this soul-killing place and stare at a computer screen under the guise of “education.” What a load.” ~ Andrew Michael Burns

“[P]aying a lot of money to get no teacher for math. that is what i remember” ~ John Hawley

“I remember vividly the obnoxious, intrusive hum of the fluorescent light fixtures; the ‘tutors’ that clearly understood the problem you were asking about, but couldn’t answer your question because they barely spoke English; the feeling of overwhelming despair that seeped into my bones with every second spent glued in front of a screen; the nagging thought that my education was being reduced to an assembly-line process; the vertigo that overtook me as I glanced down the isles and beheld row upon row of workstations stretching into infinity. In my time as a college student, I never experienced anything so degrading, time-wasting, blatantly bureaucratic, and soul-less as the wretched Hell-spawned Math Emporium.” ~ Andrew Lord Wolf

There was one somewhat positive comment on the thread.

“I’m going to go against the crowd and say that I actually really like the math emporium as a place to study. I never took the classes that were solely empo based, but I did take a few that involved having to go and take quizzes. In helping people that have taken empo based classes though, I have realized that the classes aren’t so much about learning calculus as much as it is learning the tricks to the quizzes. There are only a certain number of different types of questions, and most of the questiosn have answer patterns. So basically if you do enough of them, you don’t really even need to know much calculus to be able to do well.

Study wise, I think it’s a great place to get work done. It’s bland enough that you can sit down and do work without too many distractions, and if you take your computer as well as using one of the work stations you have tons of monitor space to use, so you can look through powerpoints and take notes at the same time and such. At the same time though, if you get bored there’s always people there to talk to/take a break with.” ~ Malou Flintsch

I’ve bolded a couple of statements in this quote because they are pretty important. First, Malou never actually took any classes in the Emporium, and she is one of only two positive comments about the experience in the thread. Second, as a tutor for the Emporium, she realized that the classes weren’t about learning calculus as passing quizzes.

I interviewed someone directly who took a number of courses in the Emporium when she was an undergrad at Virginia Tech. Her name is Jessy Irwin, and she works for a technology company that offers online lessons and instructional support for mathematics. She commented that:

There are obvious problems with such a program. First, too many students hated the experience, and this is unlikely to have encouraged these students to continue learning mathematics, which is a primary purpose of mathematics courses in university! A second objective of university level mathematics is to help students continue to develop analytical and mathematical reasoning, which it seems unlikely that the Emporium is successful in doing. One does not develop analytical reasoning from guessing which multiple choice answer matches your solution, or learning the tricks to passing the course quizzes. Another purpose of university in general is to help students foster connections with other students, and begin to develop a network of peers that they will carry with them throughout their life. This purpose is not possible when students are isolated from each other so completely.

The two benefits of the Emporium are themselves contestable. Costs may be down for the university, but according to Jessy, many students have paid for private tutoring to get through the Emporium courses, or taken equivalent courses at the local community college instead. This means that some of the students, who are already paying significant tuition fees, are being forced to pay additional fees as a result of this program, which is essentially transfering the cost of instruction from the university to the student. The other benefit – the increased graduation rates – is impossible to compare to the model Virginia Tech used before the Emporium for these courses, since the courses are so different. More important than graduation rates is the amount of mathematical knowledge and reasoning skills gained by the students, for which there appears to be no data.

Unfortunately, the Emporium has spread to about 100 other colleges since it was invented, which suggests that there are hundreds of thousands of students forced to experience it. This kind of reduction of education to what can be easily measured by a computer is dangerous since we could quite possibly end up with many people believing they understand mathematical principles, when in fact they do not.

The worst part of the Emporium? Four of the courses offered in the Math Emporium are required courses for future mathematics educators. Hopefully these educators will be able to see the Emporium for what it is – a poor way to teach mathematics.

How to develop math anxiety

Research on the effectiveness of real world problems in math education