Do you feel respected?

Here are the results from a simple poll I posted through Twitter. 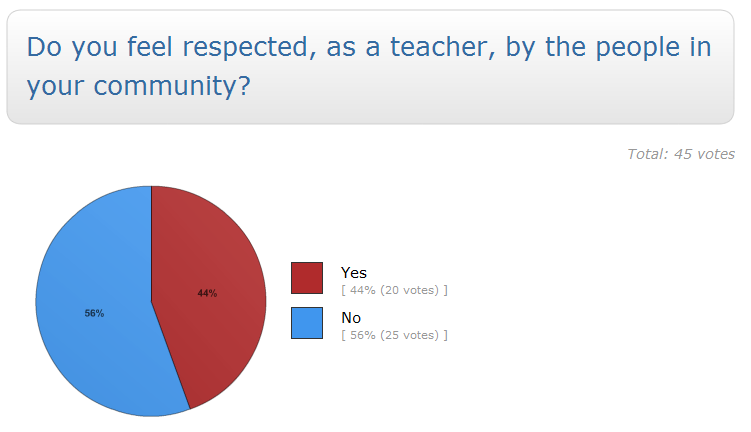 A flaw with this poll is that I’ve not defined community, so respondents were free to decide if this meant their local school community, or the community in which their school is located.

The results speak for themselves though. A profession which dedicates itself to long hours and relatively low pay (when compared to other professions where a Masters degree is nearly mandatory) should receive more respect than this.

The good news? Many teachers do feel respected in their community, myself included.

Must reads for new teachers?

One of my grade 11 students wants to be a mathematics teacher. She has asked me a for a list of books she should read. Here is a list of books I would recommend, along with some recommendations from members of my Twitter network. 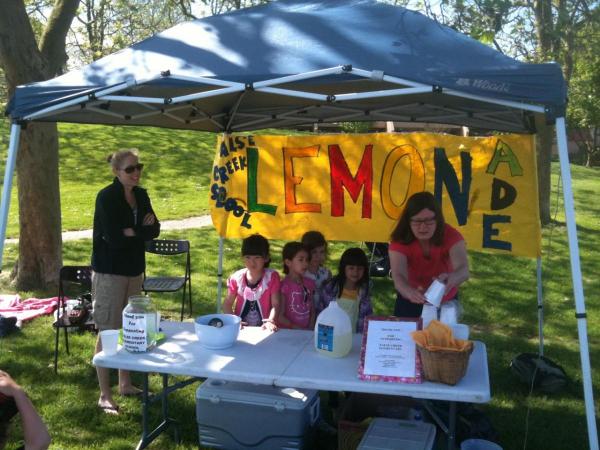 Wouldn’t it be nice to live in a world where lemonade stands were set up by kids for "extra money"? Shouldn’t we fund education sufficiently so that first graders can worry about other things?

I recently contacted Derek Stolp, author of Mathematics Miseducation: The Case Against a Tired Tradition and shared with him Paul Lockhart’s essay entitled "A Mathematician’s Lament." With his permission, I’m sharing his thoughts below.

Lockhart’s argument is very compelling, and I certainly share his concerns about the state of mathematics education in this country, if not the world! The traditional approach to teaching mathematics, however, is only part of a much larger problem: the widespread acceptance of the transmission model of learning (as opposed to the constructivist model). Educational practices continue to be dominated by the principle that, if I may state it baldly, children just need to be told what to know and how to think, and this is true to some extent in nearly every academic discipline. (And I believe that this authoritarian model is, in the long run, inimical to the development of democratic values and practices!) I won’t belabor these points here but I do discuss constructivism and the tool metaphor on about pages 50 – 60 in my chapter entitled “Whose Knowledge Is It?”

Despite the power of Lockhart’s argument, I do think he needs to go beyond a lamentation. When I wrote my own book, Mathematics Miseducation, my wife read the opening chapter and said that she found it to be too negative. (As a kindergarten teacher, her preference is for the positive approach.) I told her that, as a math teacher, my habit is to identify the problem and to be certain I understand its contours before trying to solve it. In subsequent sections of the book, I do try to present possible solutions that solve the problem. But the book itself does not provide enough detail for the average teacher to change her/his practice so I decided to set up a web-site with lessons that teachers could use that would be consistent with my approach. I’m not entirely happy with all of the contents of that site – I’ve had to compromise my ideals with the practical reality of the school in which I teach. My 8th graders go on to secondary schools so I have to teach them algebraic fractions and radical expressions in my algebra course, as distasteful as it is to do so. And when they ask me, “Why do we have to learn this?” I try to be honest and say something to the effect, “If it were up to me, I wouldn’t teach these things. Math education is very slow to change, and it’s stuck on 19th century practices. But you’re going on to a school that will require you to learn these things, so I’m trying to get you started in a way that will diminish the pain for you next year.”

Here’s another example of a compromise I’ve had to make: About 15 years ago, when I was chairman of the math department at Milton Academy in Massachusetts, some of my colleagues and I introduced mathematical modeling courses as alternatives to traditional symbol-manipulating abstract pre-calculus and calculus courses. We taught the same fields of concepts – in trigonometry, for example, modeling studied the rotation of a Ferris wheel and the shifting of tides whereas the traditional course found it more important to develop all those unnecessary trig identities – but at the end of the year, we devoted three weeks to SAT Math Level II review because these kids and their parents, while they loved the course, were not about to sacrifice their standardized test scores.

So here’s my point: Dr. Lockhart has, in his paper, identified the problem very clearly. His next step is to offer an alternative that will remain true to his ideals but that will realistically fit in a more traditional environment. He does suggest a way:

“So how do we teach our students to do mathematics? By choosing engaging and natural problems suitable to their tastes, personalities, and level of experience. By giving them time to make discoveries and formulate conjectures. By helping them to refine their arguments and creating an atmosphere of healthy and vibrant mathematical criticism. By being flexible and open to sudden changes in direction to which their curiosity may lead. In short, by having an honest intellectual relationship with our students and our subject.”

But how could he be more specific for those teachers who are sympathetic to his arguments but need guidance and resources? One way he could do that is to create a web-site with problems he has posed, indicating the levels at which they are appropriate. He’s been teaching high school, I gather, so he must be developing some materials. (I would love to see the day when textbook publishers are out of business because real teachers put their materials on-line for other teachers to access for free.) This, of course, will require considerable compromise on his part, compromise that he might feel destroys his objective. But I see no alternative.

The reality is that our schools are captive to an authoritarian trend to top-down standardization, and neither political party believes in a democratic form of education – Arnie Duncan has merely put old wine in new bottles – because we don’t really have a progressive political party – just a Republican Party and a Republican Lite Party. Progressives in education will have to chip away at the edges a little at a time and that will require distasteful compromises.

I’ve been asked to look at the Upper Elementary (Grades 4 – 6) math program at our school, and I’ve recommended using a program called Everyday Math. While I am not a textbook fan and haven’t used any for more than fifteen years, these teachers are teaching every subject and they need a resource. Here are excerpts from my memo to them:

"I know that it’s normal for every teacher to think about what needs to be accomplished by the end of the year so that his/her students will be ready for the next level and, since the kids are coming up to middle school, I thought I should let you know what skills, habits, and understandings I’d love to see among the incoming children. At http://www.maa.org/devlin/LockhartsLament.pdf is a paper entitled A Mathematician’s Lament which has been expanded into a book. This article was sent to me just this week from a math teacher in Vancouver and, while you’re certainly welcome to read the whole thing, I’d encourage you to read at least the first two or three pages – it will give you a flavor for the author’s point of view and, since I agree with him in principle, mine as well. His goals are lofty if unrealistic in today’s educational context, but they are certainly worth keeping in the back of one’s mind.

So, here are some of the important qualities that I would hope each child would possess coming into the middle school:

– Enjoys doing math
– Feels confident about approaching new problems
– Likes to make conjectures about patterns and is comfortable about being wrong
– Can talk about methods of solution with classmates
– Is resourceful about finding a solution method if he/she had learned it before and has forgotten it.

You’ll notice that there’s nothing here about knowing his/her times tables or knowing how to add fractions. Naturally, I’d love for each child to know these things but, to me, they are secondary. If a child has to take timed quizzes on multiplication facts (mad minutes?) or do pages of drills on adding fractions to master these, then the price is too high because it hampers the development of the qualities that I believe to be more important. So, that’s my bias. In the process of teaching math, we want to expose them to the many concepts and skills in your curriculum but, if they aren’t ready to master some of them, that’s fine – they’ll master them later.

One thing to keep in mind about the program: it’s not important for each and every child to achieve mastery before moving on. Some will, some won’t, and those who won’t will have chances later on to achieve it. And if they don’t by the seventh grade, don’t worry about it – I’ll address it then, and maybe they still won’t achieve mastery. (Several years ago, I had a conversation with a parent at Milton who was also a child psychologist working at MIT’s Department of Brain and Cognitive Sciences and she told me that several of her colleagues used to joke about the fact that they had never been able to learn their times tables. Somehow, these people managed to get by!!) The program has a good balance between skills practice and review on the one hand, and investigations and games, on the other. And I would lean heavily in the direction of investigations and games."

This memo to my colleagues reflects the kinds of compromises that I believe are necessary; the road to progressive education can be walked only one step at a time. Anyway, these are my thoughts regarding Dr. Lockhart’s excellent article, and thanks for allowing me to share them with you.