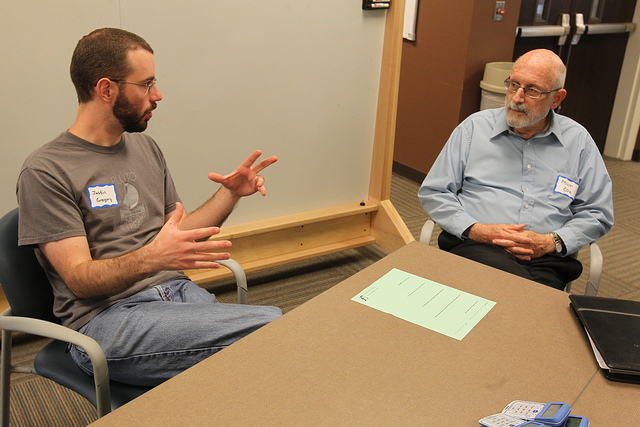 One of the trends with technology today is that it is beginning to redefine the means through which we are social. Prior to the invention of writing, social learning meant discussing ideas with someone in person, the invention of writing allowed social interactions to span geographic and chronological barriers. The trend throughout history has generally been to expand the distance between participants in a conversation and reduce the time delay in a response until today we can potentially interact with people on the other side of the planet via video link with almost no delay.

There is plenty of evidence that learning works better in a social context. BF Skinner’s teaching machines and IPI, both attempts to automate learning, are failures without social interaction. The key affordable of social interactions in learning is timely, contextual feedback on the schema the learner is attempting to build. Without this feedback, it is too easy for our brains, designed to find concrete patterns more easily than abstract patterns, to construct an alternate set of schema that might satisfy all of the information we have, but which is too inflexible to add new information. It is my experience that we tend to more complicated, convulsed explanations of reality without feedback, than less complex but more abstract explanations.

This affordance of a social interaction will help us define what the minimum amount of social interaction should be in a robust learning environment. If the interactions between participants of a learning space lack timeliness and context, then they are unlikely to be useful as a social tool for learning. It may be that they are one-way timely (where you write or say something in a video, and when I consume it years later it acts as useful feedback to me in that moment) but these interactions lack the fore-knowledge of the non-interactive party of what understandings the interacting party has. A one-way interaction cannot give personalized feedback based on the interaction.

If social interactions are so critical to learning, why is it so many learning experiences are designed solely around content? Given the ability of technology to connect people across vast distances, why is so little of this technology available in the learning environments of today’s online courses which include, at best, primitive forum discussions? The primary difference between the MOOCs offered by Stanford, MIT, and others, and the more organically designed cMOOCs (like #etmooc and #oldsmooc) is that the first set of MOOCs treat social interactions as a side-line to the main show, whereas in the cMOOCs, the social interactions ARE the show.