Bon Crowder has started an initiative to embed numeracy in the early lives of children via their parents, which she calls Count 10, Read 10. The basic idea is to split up the 20 minute of reading for parents into 10 minutes of numeracy and 10 minutes of literacy every day.

Most parents aren’t reading to their kids daily (only about 48% in the US do) which is hurting their abiliy to learn how to read when they get to school. Unfortunately, an even smaller percentage of parents engage in daily numeracy building activies. If you think not being read to impacts your ability to be successful in school, imagine what happens if you can’t count.

Only 45% of adult Canadians are numerate, "demonstrat[ing] skills and knowledge associated with the ability to function well in Canadian society." By comparison, 52% of adult Canadians demonstrate the minimum levels of literacy required for a person to function well in today’s society. Neither of these numbers is very impressive, but clearly our society is doing a slightly better job preparing people to be literate.

One issue, besides of course having time to do these activities with their children, is that many parents don’t know many strategies for building numeracy. Just as educators provide strategies for parents to use to develop early literacy skills, we should do the same to help parents with early numeracy strategies for children.

As a parent with a strong sense of numeracy, and an educator, I have some activities I’ve done with my now 4 year son which you are welcome to share with parents.

My son, wife, and I count everything. We count stairs as we climb them, we count plates as put them out on the table, we count down from 10 when we pretend to blast off in our rockets, and up to 10 when we play hide and seek. We count by twos, we count by fives, and we count by tens. We talk about the relative size of numbers, and use language like less than, more than, and other mathematical comparison language. 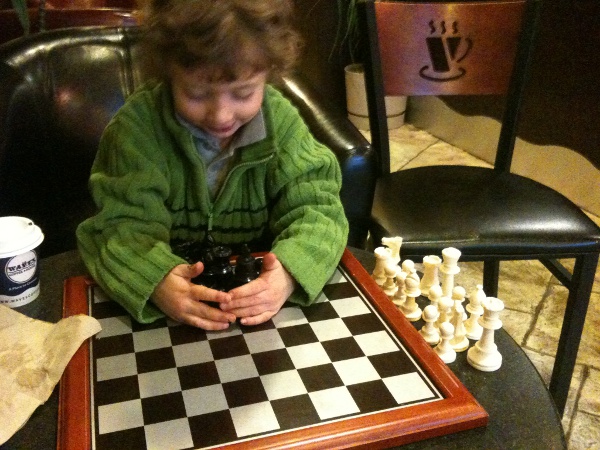 We play dice games, like Backgammon or Parcheesi and recently even more advanced dice rolling games like Titan. My son counts up the two dice by himself to see how far he gets to move, and then counts to move his pieces. We play Chess together, and my son’s favourite part of this game is making up rules for how the pieces can move. We play card games together, like Go Fish and War which not only let my son see both the numerals, and a representation of the number on the cards themselves, but also look for comparisons between numbers.

My son bakes and cooks in the kitchen with both of us and is learning about ratios in food, and fractions in baking. We split cookies into halves when sharing, and cut sandwiches into quarters. We talk about food and how old my son is in terms of fractions. He knows he was once four and a half, then four and three quarters, and now he is four and eleven twelfths. While he doesn’t know what eleven twelfths means yet (although he does understand halves and quarters), the fact he has heard about fractions being used in context allows him to start developing some meaning for them.

We build patterns together. We’ll stack blocks into stair cases. We’ll talk about the shapes of blocks using their names (like pentagon) and together we will explore the similarities and differences between his shapes. We make circles out of his train tracks. One of his favourite toys is his magnetic blocks, which he builds into many different types of shapes.

The point is, my son is immersed in a world of numbers and his ability to see the world through numbers later in life is greatly increased.

The PALS program – hope there is more to it than this

ViHart and the Khan Academy