This is another in a series of posts about how one could find mathematics in the world around us. 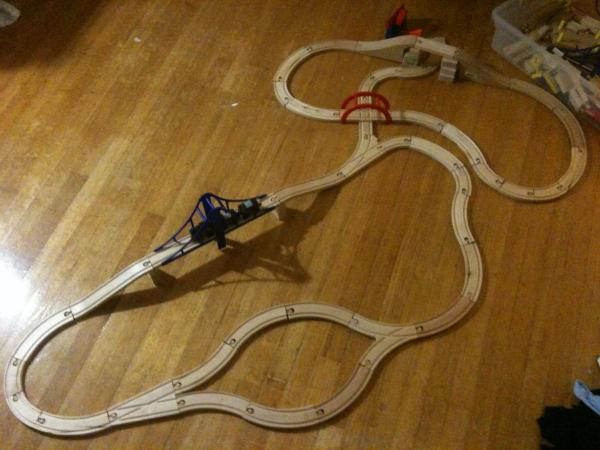 My son loves to play with train tracks. A few days ago, while playing with his train tracks, he observed, "Daddy, I can’t turn a train around." I asked him what he meant. "No matter which way I go on this track, I can’t get my train to start facing in the other direction. I’d have to pick it up, but that’s cheating." (Note: I’m paraphrasing here)

Observations like this are mathematical observations about the world. He has abstracted from his train tracks to a property of his train tracks, specifically the direction his train is able to travel. He has then attempted, and I watched him do this, to verify this statement is true by running his trains around the track in every possible comination.

My wife and I spoke about this later, and she came to the observation that in order to be able to turn around his train on the track (without "cheating" by lifting it up), he needs a closed loop with a single entrance and exit point included in his track somewhere, and this entrance and exit point has to connect to the rest of the track in a certain way. So I asked the question, does he have the right track to be able to create a closed loop? If you look at the picture above, you may be able to answer this question yourself.

The area of mathematics that deals with these kinds of issues is called graph theory, and it was invented by Euler for a very different purpose many years ago. It is unfortunately not in most school curriculums, but it is certainly an interesting area of exploration, and one which is accessible to students.

They have call centres now