One major barrier to students learning mathematics is that they spend a lot of time NOT enjoying themselves.  Let’s be honest, listening to poetry is enjoyable if the poetry is selected carefully.  Having discussions about current events in History, while learning critical analysis skills, is fun.  Solving a cubic equation is just not a lot of fun, even for mathematicians.

We as mathematics educators are charged with the job of making math accessible and more easily learned by our students.  It makes sense therefore to inject a bit of fun in once in a while, especially if you can justify it with some educational theory that suggests it is pedagogically worthwhile. 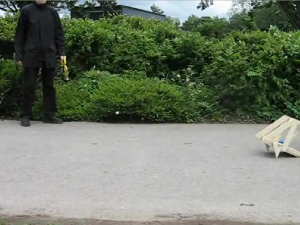 A project I have done with my 9th grade students now for 4 years in a row, is to have them do some quadratic modelling.  When I worked in London, I was really lucky because the students were creating trebuchets and catapults in their Design class.  So we had a class where the students took their models they created in Design up to the nearest park, and we took digital footage of the trebuchets in action.

At the end of the period, when the students had enough footage, they submitted some samples of their models at work in digital form directly to my computer, and that night I converted their video to a usuable form.  This actually meant I spent hours figuring out how to convert all of their wacky video formats into something readable by the FFMPEG converter to an flv file, which I could then set up to stream.

There were some technical difficulties which some of the groups had.  For example, one of the groups decided to do their footage from 20 metres away with no background…their poor little golf ball wasn’t very visible in their footage.  Another group videographer had a very unsteady hand.  However, I ended up with 6 good videos, so I split the students into 6 groups and they went to work analyzing their footage the next class.

Students had to figure out a way to convert the flight of their ball into coordinates, in other words numerical data.  They then had to decide on a model for their data, and find an equation to represent it.  I also had them calculate the mean horizontal speed (which involved being able to convert frame rates into an appropriate unit of time).  Finally there were some questions the students had to include in their write-up for this projectto focus their thinking on the physical phenomena that happened.

What was wonderful about this experience is the reaction of the kids.  At all stages of the project they were all actively engaged and interested in what they were doing.  The mathematics, which could have been very dull and boring for them came alive.

Just listen to the reaction of the students in the video when their trebuchet goes off for the first time.  How often do you get to hear a spontaneous cheer in a mathematics class?

Working with a 1 to 1 laptop program