The ISTE conference is over, and I’m finally able to unwind and get a chance to reflect on the experience.  The conference was awesome for many reasons, but there was a reoccurring theme that happened during the conference, which to me was the most important part of the conference.

When I first submitted my proposal to my school to attend this conference, I realized I would have to try and keep my budget down so I volunteered to stay with relatives of mine who live in Boulder.  My school happily accepted this compromise, and paid for my registration and airfare.  Unfortunately, it turned out that my relatives, who were originally able to put me up, were going to have to be out of town during the conference, and this meant that my free place to stay was no longer available.  Ugh.  I posted a request on Twitter for some help finding a place to stay, and within a couple of hours, @cindybuchanan generously volunteered half of her hotel room.  First connection made.

We met at the airport on Saturday, using Twitter to confirm out location, and picked up our bags.  Cindy had rented a car, so we went and picked it up, then drove to her hotel.  We stashed our stuff, thanked the staff for providing the spare roll-away bed, and went out to get a bite to eat and get to know each other.  Yeah, I spent the entire ISTE conference sleeping in the hotel room of a stranger, although of course by the end of the conference, we were friends. 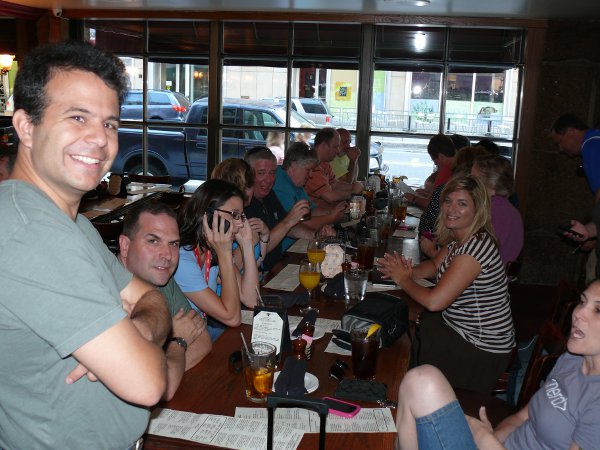 Sunday, we slept in a bit, then headed to the first Tweet-up of the conference for us, at Marlowe’s.  We got a chance to hang out and meet people, and I met @mbteach, who is a huge part of #edchat on Twitter.  They had some awesome t-shirts with <nerd> on the front, and </nerd> on the back, which I really wished I remembered to purchase in advance.  Very cool.  If you have to ask why it’s cool, you aren’t a nerd.  I also met @geraldaungst and @kylepace here and many other Tweeps.  Second connection made. 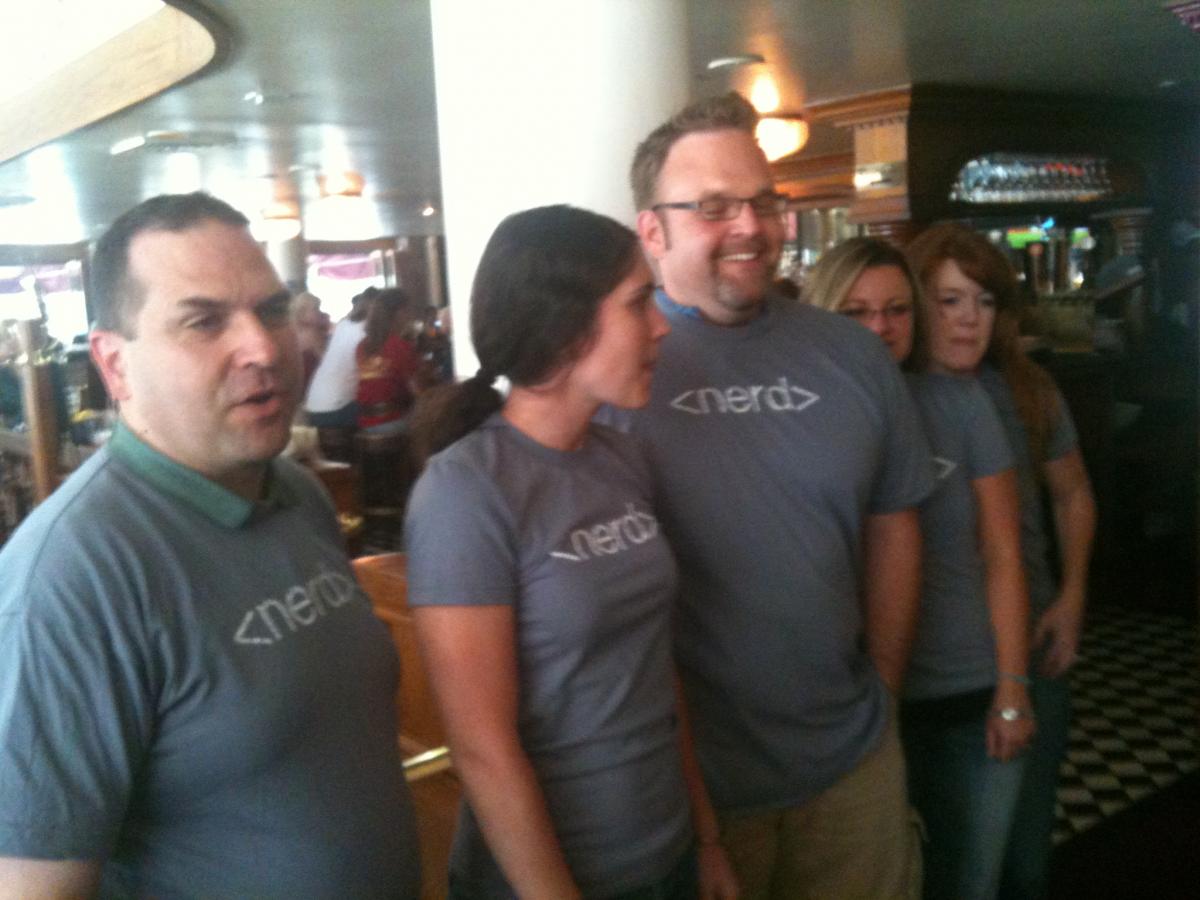 That night we went to the Wells Fargo theatre in the Denver convention centre for the conference kick-off which was pretty funny.  Pretty silly, but definitely worth going.  We went outside and headed our separate ways for reasons which I don’t remember, and I missed the keynote address.  Well not really, I was outside the theatre at the Blogger’s cafe trying to watch it on the screen, but the speaker was being lambasted so much it was difficult to do.  Fortunately @dwarlick posted a mind-map summary of the keynote, which turned out to be much easier to understand than the actual keynote.

Cindy and I met up at the Hard Rock Cafe where we got to participate in another Tweet-up.  We got the opportunity to hang out and chat over some beers.  There were a lot of other people here from Twitter, including @angelamaiers and we made another connection. Cindy and I were pretty exhausted though, so we headed back to the hotel and got excited about starting the actual workshops on Monday.

Monday I participated in an early morning session on tablet PC’s in the classroom which I’ve blogged about on here already, and also the 10 Pitfalls to Implementing Open Source, run by Revolution Linux.  Both of these sessions were great, as was the time I spent during the day intermittently at the Blogger’s cafe.  In the afternoon I volunteered at the Twitter table at the Social Media playground, and converted 10 people into Tweeps.  It’s not hard, the argument is pretty simple and I’m sure most of you will have heard it before so I won’t repeat it here.

After a session on using Google Sketch-up for Beginners, Cindy and I met up again and went out to dinner at a Tex-Mex style restaurant before going to TEDxDenverEd.  The TED conference was great, lots of fun listening to all of these great speakers.  I know some people complained that they wanted a wider set of ideas, but to be honest my expectations were met completely.  I was very impressed with all of the speakers, even if I knew I wouldn’t be able to use all of the ideas myself.  We got to participate in a social justice idea brainstorming session which was lots of fun, listen to some more speeches, and then we got to go home.  Cindy also won a classroom response system made by Qwizdom which was very exciting. 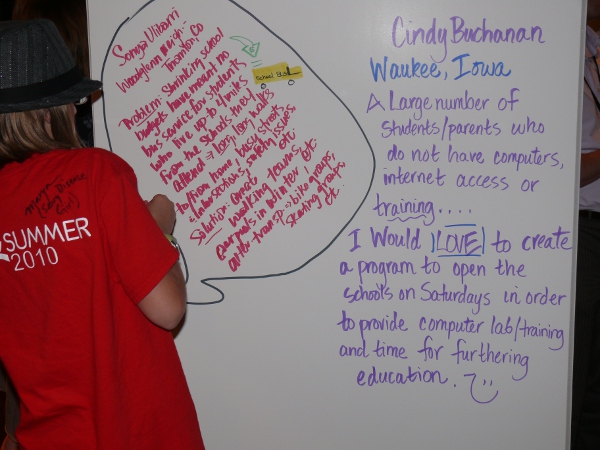 I spent my morning on Tuesday checking out the exhibit hall, and hanging out at the Blogger’s cafe.  I submitted an application to the @inFocusEdu booth and won an interactive LCD projector.  I was super pumped about this, and happy that inFocus was willing to ship the projector directly to my school.  At the drawing, I ran into Dr Fred Mednick, the founder of Teachers Without Borders.  He was one of the speakers at the @TEDxDenverEd conference, and I invited him out to lunch.  We had a great discussion about education, and technology in education, and how these major conferences always seem to stray toward the use of the gadgets and away from our primary purpose, which is teaching kids.  This was a great connection that I made, and I am hoping I can find more time to participate in his program.

I then listened to a lecture by Jeff Lao on designing a successful 1 to 1 program which was pretty fascinating, if only because of the detail Jeff went into.  Jeff works for the state of Maine, and has helped set up the very successful 1 to 1 Macbook program that Maine uses.  I’m pretty impressed that an entire state is 1 to 1, and it gives me hope that the future of other states, and my own Canadian provinces will follow in their footsteps.

#edchat was being held live at ISTE, in the Social Butterfly lounge, but to be honest it ended up being a disappointment.  Everyone was on their laptops and the discussions that I would have liked to have had in person about education never really materialized, despite my efforts to engage a few of the isolated groups participating.  On reflection, I would probably have much preferred the session that @teachpaperless went to, on Games, MMOS, and Virtual Worlds.

Tuesday evening Cindy and I went to the @simplek12 Tweet-up for dinner, had some fun hanging out for a bit, but then bailed early because we were both so exhausted.  We went back to the hotel room, and I got a chance to finally reconnect with my wife for a bit, and put a little bit of work into my Masters degree, then I connected with my online gaming buddies and played an online game for a bit.

Wednesday went by pretty quickly.  The only session I really enjoyed was on using Blender in the classroom and most people at the session had difficulty.  For me, it was a great opportunity to get introduced to the program, and learn enough so I can get started on some more complicated projects.  Once this ended, I rushed to the keynote address by Jeff Piontek, which was excellent, but for me was a restatement of a lot of ideas I was already aware of and agree with.

The highlight of Wednesday was by far having dinner with @teachpaperless where we totally connected about some action that needed to be taken in education.  Shelley’s big idea was that we need to bring together people from all areas of education and have them work out a solution, rather than relying on a largely unsuccessful top-down approach.  Bring in people from the top educational management, the leaders of educational technology, teachers, students, parents, and government officials and have them work out some concrete solutions to the problem of educational reform.  Interestingly it looks like British Columbia, my home province, might be doing just that. 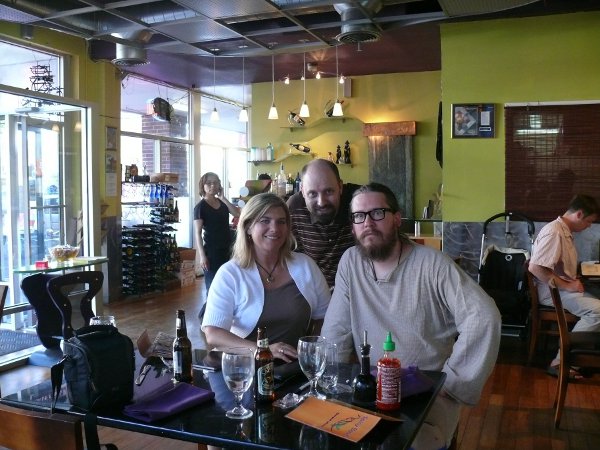 This conference for me was all about the connections that I made.  I may forget what was covered in the workshops, in the keynote addresses, or in the many tweets that I read, but I will never forget the people that I met, and the impact they have had on my thinking about education.