If we teach as if everything we know is written in stone, our students will end up with the impression that knowledge is something static and unchanging, which is demonstrably false. A professor I had told me once, "Something is true when everyone stops complaining that it isn’t true." A corollary of this is that there are a lot of things which we assume to be true but which probably have some controversy associated with them.

Teach the controversy. Have rich conversations about why the controversy exists, and what each sides’ perspectives on the controversy is and what evidence supports their perspective, even for something as contentious as evolution. If we ignore the controversy, even when we don’t necessarily agree with some of the perspectives of it, we allow some of our students’ unspoken counter-arguments to remain hidden, and they will have little opportunity to make an informed and education decision for themselves.

Neil Postman gave a terrific talk on "Bullshit and the Art of Crap Detection" for which I recommend reading the transcript. He doesn’t have any solutions for the issue he brings up, but I believe that teaching controversy and asking students to present evidence that supports each side of the controversy is one of the best ways of giving thinking tools to students so that they can be armed with their very own crap detectors.

If I can’t provide evidence that something is true, it may be crap (corollary: the last sentence of the previous paragraph might be crap). What do you think?. 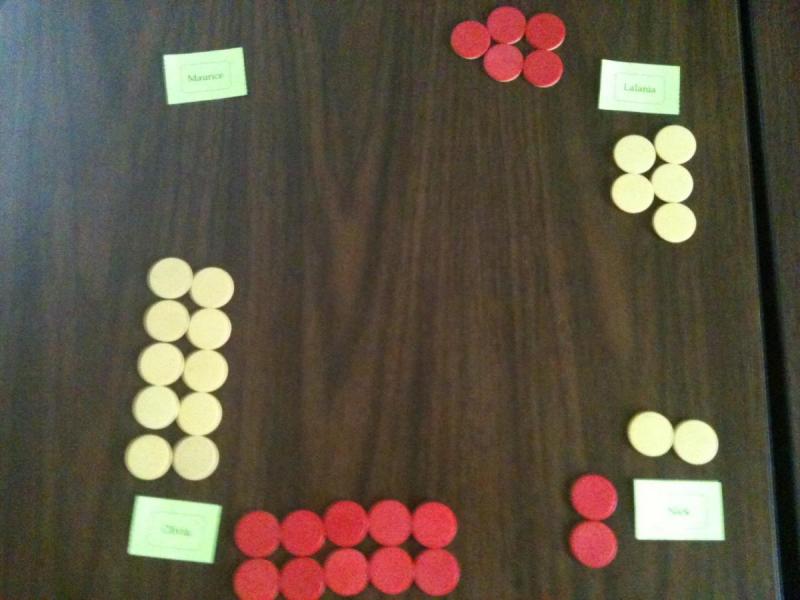 Today in a workshop with Sally Keyes of the Silicon Valley Math Initiative, we started off the day with what I would call a jig-saw problem. Each of us was given a clue, and the instructions that for this activity we could not use pencil or paper, or share our clue card directly with our group members, but that we could talk about our clue. We sat in a group, and had some counters, beans, and paperclips we could use if we wanted.

The problem we were given was called Four Kids with Figs. Each of us had one card with one clue on it, and together we tried and figured out how many figs each kid had. During the problem solving, Sally walked around the room and listened to us work, but she very rarely interjected any of her ideas, she mostly just listened and used what we said to debrief the problem afterward.

Not having pencil and paper (or access to any other recording devices) meant that we couldn’t easily record what each other said, and this led to increased discussion between us, and the need to use the manipulatives we were given to create a shared representation of the problem. We also had a discussion around what makes collaborative groups work better, which probably helped our group work be more focused. Having ownership over a clue meant that each of us had to interact with the others at least enough to ensure that our clue was interpreted by the other members of our group.

We had a very interesting problem solving session, and I attempted to capture a snapshot of our work above. It was fascinating to me to see how we ended up representing our solution for the problem using the manipulatives we had, and how the constraints of the task influenced our work. I could see this structure being a really useful way to facilitate mathematics discussions and problem solving in a classroom setting.