What are the effects of exposing children to technology at a very young age? 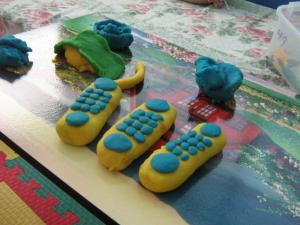 My son is currently two and a half years old.  Already he has been exposed to and used mobile phones, televisions, dvd players, computers, remote controls, air conditioners, toasters, and a variety of other electronic devices.  He’s ridden in cars, trains, airplanes, tuk-tuk’s, vans, trucks, Fire engines, motorcycles and on bicycles.  He has a lot of experience for someone his age with technology.

We took a picture of some cell phones my son wanted me to make out of play-dough.  You can see he wanted three identical cell phones, one for each of Mommy, Daddy and himself.  When I was building the cell phones out of the play-dough, it occurred to me that this was an experience I never had.  When I was at the age where playing with play-dough was super-duper fun, cell phones didn’t exist.  Personal computers were just starting to become affordable for the average consumer.  How much our world has changed since I was a kid, and I know this trend is likely to continue. 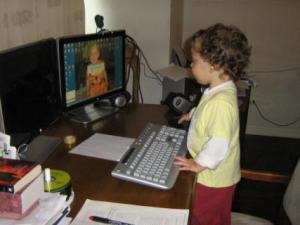 One of Thanasi favourite past-times recently has been learning how to make letters show up in Microsoft Word by pressing on the keys.  He’s already learned that the Enter key adds a line, and that the backspace key deletes the previous character.  The reason, of course, that he is so interested in computers is because of me.  I spend a lot of my time working with computers, and that has been consistent for Thanasi’s whole life.

My wife the other day mentioned that Thanasi was learning the same skills she is teaching some pre-schoolers, and I began to wonder then, what is happening inside his brain?  Is this too young for him to be exposed to technology?  I’m hopeful that this will just be giving him a bit of an edge in a world that is becoming more and more technology laden but there is the concern that his brain will end up wired differently as a result.  Fortunately for us, Thanasi is quite a social child, so no worries about him deciding to retreat into a digital world.