Let’s try a little experiment. Take a look at the following network graphs and think about what is different for each graph and what is the same for each graph.

Now look at this matrices associated with these network graphs.

Which network graph do you think goes with which matrix and why? (This might take you a few minutes. Be patient.)

In the network graphs, as you no doubt noticed, the number of nodes, the labels for the nodes, the ways arrows are connected between nodes, and the direction of those arrows are all important features. You may have concluded as well that the actual positions of the nodes do not matter. Additionally, by looking at the network graphs and this paragraph, you may also know exactly which parts of the graphs I mean by the word ‘node’ (if not, I mean the circles with the numbers inside).

I’ve recently been attempting to incorporate a critical idea from variation theory into the design of curricular resources; students learn from noticing differences across a background of sameness, rather than from seeing similar objects and discerning the important features by what is the same across each of the objects. Another way of saying this is that differences stand out much more than similarities do.

Tasks that are not really learning tasks

Not all tasks are tasks that students will make new connections from. Some tasks require students to demonstrate understanding of a concept they already know. While it is helpful for students to rethink about ideas periodically as there is significant evidence that this helps students remember ideas over time, we also need to use tasks that build new understanding.

Here’s an example of a task on the same content that assumes students know some mathematical ideas already. 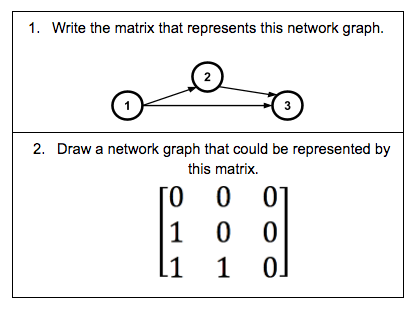 Note that it is impossible for students to do this task without already knowing how to answer both questions. This is not a task that students are likely to learn something new from on its own.

Side note: This is by the most common kind of task I see when I have observed teachers over the past five years.

For example, try and solve the following mental arithmetic problems in your head, without a calculator, and without writing anything down. While solving these problems, deliberately try to use what you’ve done in an earlier problem to make the next problem easier to solve.

What did you notice yourself doing as you worked through the problems? What big idea might students get out of solving this series of problems?

My point is that I have increased the odds that you saw this regrouping strategy by deliberately choosing the problems for you to try.

If you are designing curriculum or tasks for your students here are my two recommendations:

Moving beyond CUBES and keywords