My grandmother on learning how to write

My grandmother, Frances Shelley Wees, was an author and as such, she would often receive letters from people, particularly young women, asking her how she got started. A kind stranger found this letter from my grandmother to her grandmother (Mrs Hanson) in her possession, found me online, and emailed me a scanned copy of her letter. I’ve transcribed it below.

I hope you will forgive me for not having answered your letter long ago. We have been back in Toronto for two weeks, but I’ve been settling us in a new house and getting my youngster’s clothes ready for winter–you know exactly what it’s like, I’m sure. And the grapes and the crabapples are still in the fruit stalls here and I’ve got a very jelly-minded family so I felt I had to do my housewifely duty by them.

I wish I knew exactly how to advise you to go about writing. I do think that what might be the right procedure for one would be wrong for another. In my own case, I’m sure a course such as the Shaw Schools offer would have been the wrong thing to take at the beginning, although, I think, like you, that I might profit by it now. I don’t, of course, know how old you are; but your letter sounds so sensible and philosophic that I don’t think you can be told the things one tells the twenty-year olds when they come asking. I tell them to go home and write and write and WRITE and forget about themselves and how famous they might some day be, and scrape off all the fancy polishes and work for simplicity and humility. You’re so much beyond them in your outlook on life. Maybe a story course, which would emphasize technique and give you a few rules, would be exactly right. Before technique, I feel, comes an attitude of mind, hard to acquire but invaluable. Until one has that attitude all the courses in the world are pretty much wasted, I should think.

I don’t really know anything about the Shaw Schools. I’ve heard of Mr. McKishnie. Their price seems pretty high. There is a first class course offered by the Home Correspondence School of Springfield, Massachusetts, which is only thirty-odd dollars. I’ve seen some of the lessons and criticisms, and thought them first-rate. Perhaps you would like to write to them and get their literature. The man who is at the head of it has been operating his school for a great many years and has written several of the leading text-books on short-story technique.

You ask about how I began. It might be misleading if I say I just began, with no training–I’ve not been to University and I never took any courses of any kind–because I had a husband who was (and is) a psychologist and a writer, and a number of friends who were more than generous with help and criticism. So that I got a good deal of guidance, some of which I did not at the time particularly appreciate. I honestly think that my greatest helps were the books on criticism and technique which i got from the libraries. I suppose I have read and minutely synopsized fifty or sixty of them, and of course have read countless others. Not quite countless; there aren’t so many. Perhaps you could get them through the extension library of your University (I’m not sure Saskatchewan has an extension service, has it? If not, you might try Alberta. Miss Jessie Montgomery, Extension Library, U.ofA. would do whatever she could for you, I know. She would send you a list of such books and if the regulations permitted would send the books themselves if you would pay the postage.

You have a number of advantages as a beginning writer, and your place of residence being one of the greatest. I find it much more difficult to write in the city..to shut myself away for the long periods of time necessary to do a good piece of creative work. Of course I enjoy all the interesting things going on about me, and eventually find them stimulating; but while I’m writing, all the stirring about me is irritating. I wrote my first five books in a little town in Alberta where I had my friends all warned that if they dared ring the telephone between certain hours I would put the curse on them.

I feel that this is a very inadequate letter, Mrs. Hanson, and I wish I could do something that would really help you. I know so well those early helpless feelings, the blackness of not knowing where to turn and yet having to go forward. I wish I could ask you to send something you’ve written for me to criticize, but time is a thing I don’t possess. Criticism is the thing beginners need most, I suppose. Although I’m not even sure about that. Maybe all they need is the firm resolution to be honest with themselves, to find out what they truly feel and believe about life and people then to write as simply as possible. If I were you I should most certainly attempt to sell the poems. You might try SATURDAY NIGHT, here in Toronto. You might try the Saskatoon paper, or any of the other western papers which use poetry. Get something into print as soon as possible. Seeing it there will open a strange and rather terrifying door for you…but the sooner that door is opened, the better.

Do send me a little note some time to say how you’re getting on. Thank you so much for your good wishes…I need them. I don’t find the path any too smooth. I don’t think a women does, when she has to manage a house and take care of a family. And there’s never as much money in writing as people think there is, not enough for the first years anyway to pay for responsible assistance. You have to mend socks with one hand and type manuscripts with the other, and carry whooping cough along in the next compartment to The Great Canadian Novel..and you have to like it.

Here are the big messages I see in my grandmother’s advice to this young writer:

I was looking for research on whether word processors are effective when students are learning to write. So far the research is supportive, but I can’t find any research done recently. I suspect there must be research that is current and supports students using word processors. Please let me know if you have any research more recent than what I have below.

Abstract: This study examines the influence of word processing on the writing quality and revision strategies of eighth-grade students who were experienced computer users. Students were asked to compose two expository papers on similar topics, one paper using the computer and the other by and, in a counterbalanced repeated measures research design. When students were writing on the computer, "electronic videos” were taken of a subsample of students using an unobtrusive screen-recording software utility that provided running accounts of all actions taken on the com- puter. Papers written on computer were rated significantly higher by trained raters on all four dimensions of a holistic/analytic writing assessment scale. Analysis of the screen recording data revealed that students were more apt to make microstructural rather than macrostructural changes to their work and that they continuously revised at all stages of their writing (although most revision took place at the initial drafting stage). While the reason for the higher ratings of the computer-written papers was not entirely clear, student experience in writing with computers and the facilitative environment provided by the computer graphical interface were considered to be mediating factors.

Is my son a writer?

This is a list my son created of things he wanted to make sure he got done for the day. 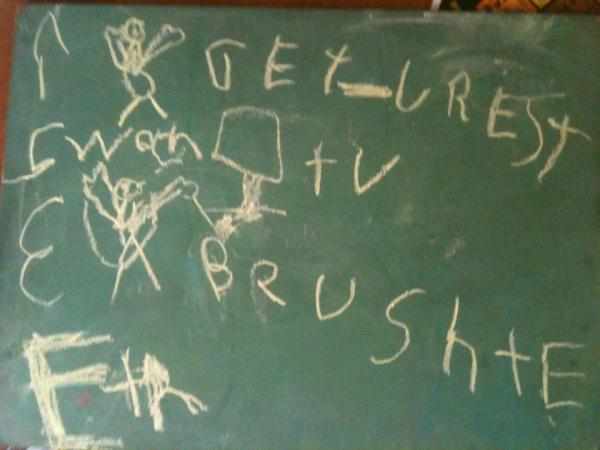 I’m of the opinion, at least at this stage, that we allow our son to make mistakes without being overly concerned about correcting them. Once he learns how to read, he will naturally learn how to spell better, and he will also learn more of the rules about how we write things down. At this stage grammar, and structure are somewhat unimportant, and just being willing to experiment and make an attempt is of critical importance.

What do you think?