A binary number is a number written in base 2 format, like 101010101111.  The binary number system is handy because it can be easily related to logical operators used in circuitry, and so almost all modern computers use this format for communication.

We use the decimal system for communication in our day to day lives because it is related to our original numbering systems, and this entire system was developed because of we have ten fingers between our two hands.

Compare this to the traditional 10 by 10 multiplication table for decimal numbers. 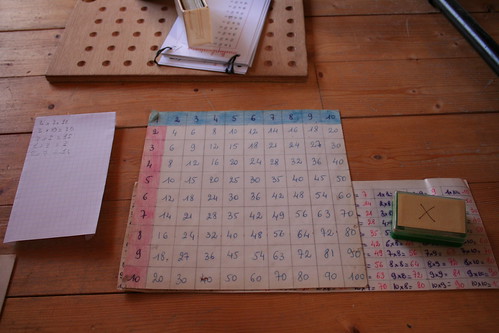 If you want to multiply numbers in binary, you could use some similar strategies to regular decimal multiplication. For example, 10101 times 101 looks like this: 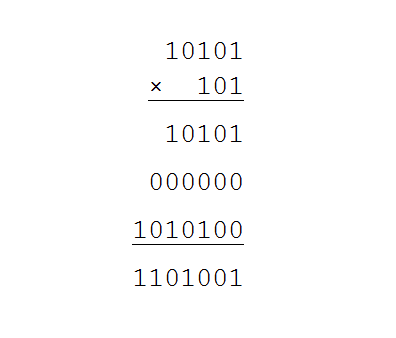 The point of this activity is that you have taken something which is hard to do (memorizing a 10 by 10 times table) and switched it to something which is conceptually more difficult, but easier to memorize. For smaller numbers, it is faster to multiply directly in decimal, but for larger numbers, it will actually take less time to convert them to binary, do the multiplication, and convert back. You may notice that the multiplication step itself is much easier than decimal multiplication, since it’s just a matter of remembering 2 facts (0×0 = 0 and 0×1 = 1) and lining up the numbers correctly so that the place value matches. Check this page out for more information on binary number operations.

If all of this feels arbitrary and bizarre to you, now you know what many 3rd graders feel like when they are first introduced to multiplication.

Math in the real world: Sound

Group for Canadian educators on LinkedIn