Edcamp Vancouver – “The Best Professional Development of My Life”

I think the key to our success came from three areas. First, participants felt they had complete ownership of the professional development process today, second, the group of people we brought together was amazing, and third, the format of the presentations were exactly like the conversations we were hoping would develop.

Ownership is key because it helps participants feel motivated to attend the session, and be more willing to set aside their fear of the unknown. There is some risk in attending a professional development session like Edcamp, because the participatory nature means that some of your ideas about how education works might be challenged. At a minimum, you can only set aside your fear and be open to learning in such an environment if you feel like you have chosen your path.

Attendees had ownership of their experience at Edcamp Vancouver in a couple of ways. Most importantly, they chose whether or not they attended the conference at all. I heard many times during the day, "No one forced us to come today. We came because we chose to come." As I mentioned half-jokingly in our session on professional development, "I’m not going to grade you, and I’m not going to record your participation for your teacher certification." The second and important piece of ownership attendees had was the ability to choose which sessions they attended.

We also had an amazing group of people attend today. Stephen Hurley (@stephen_hurley) travelled from Ontario, Ron King (@mthman) travelled from Washington State, and Tom Schimmer (@tomschimmer) came from Penticton, BC. We had people from all over the Greater Vancouver area, which in itself is interesting because of the limited opportunities to cross-pollinate ideas between districts in British Columbia (most professional development is organized either at the school or district level). People who attended were passionate about education, and interested in both sharing what they know, and learning from each other.

The presentation format itself was I think the most important reason our unconference worked. Here’s a diagram to try and explain the primary difference between a traditional conference, and an unconference. 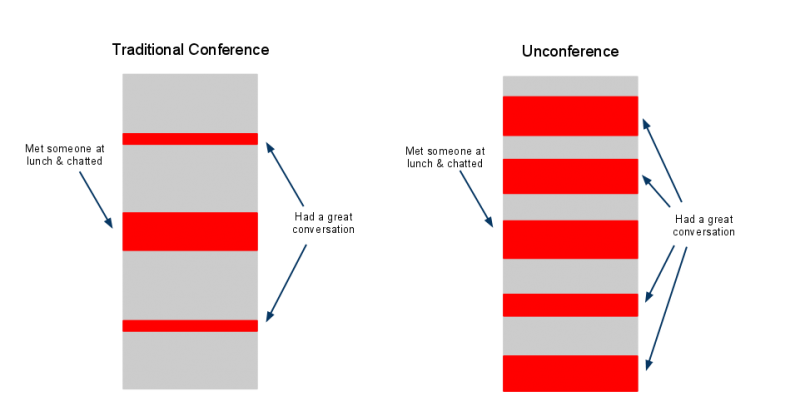 We limited the opening presentation to 15 to 20 minutes, and then we had a facilitated discussion between participants for the remainder of the session time. Every session I went to had deep conversations, had people who brought up points of contention and disagreement (respectively) and had many, many people participate in the discussion. Every session  I went to went overtime because people weren’t yet ready to finish their discussions.

At the end of the day, the feedback we got from people was positive. Although we had some small issues that came up during the day, nothing failed completely, we were able to work around every problem that came up. I’ll never use a random number generator to hand out prizes again, for example. We’ll find a faster way to choose prizes for participants.

So success today, and we’ll see what happens to the Edcamp model for professional development in British Columbia, but my gut instinct is, it’s here to stay.

The Case Against 21st Century Schools