Last Saturday, I tried a new instructional activity called Choral Counting. This activity was recommended to me by Magdalene Lampert and comes out of the work she and others have done to support high-quality ambitious teaching.

I’m experimenting with these instructional routines in part because I hope to support teachers in the project I support in using them in their instruction, which I can hardly be expected to do without experiencing them from the inside myself. It’s clear that this activity is much richer mathematically than one might expect from just hearing about it. One finding I have already is that I have to do a much better job of planning how I will use my space when recording the numbers!

The basic idea of choral counting is easy — students count in unison and you write down the numbers as they chant, and then pause students to ask them questions about the numbers. What I learned Saturday is that there is a lot of potential in this activity to bring out rich mathematical ideas for discussion as a group.

I chose to start at sixteen and count by fives. While the counting was going on, I noticed my students paused a bit at 76. So I stopped and asked them why they think they paused. They also paused at 101, which during my lesson planning I had anticipated they would do. They also had different responses at 111 (121 was next, which I expected).

I don’t know why they found 76 more challenging. Maybe because it was the first time they had to use a number in either position higher than 6? 101 is clear – Many students thought “tendy one” and self-corrected before they spoke, which slowed them down. I thought this myself when I first counted through this routine! Many students said 121 instead of 111 and I remember my own son doing something similar when he was learning how to count.  I also paused a couple of times to ask students what pattern they noticed and at one point I asked them to predict what the number would be if we counted four more times. One student proved her answer by counting up by fives, another student said it would be twenty more because four times five is twenty.

Here’s the data collected by my assistant teacher (one of the children’s older sister comes to the class and she has happily volunteered to record information for me and to walk around the class generally supporting students). 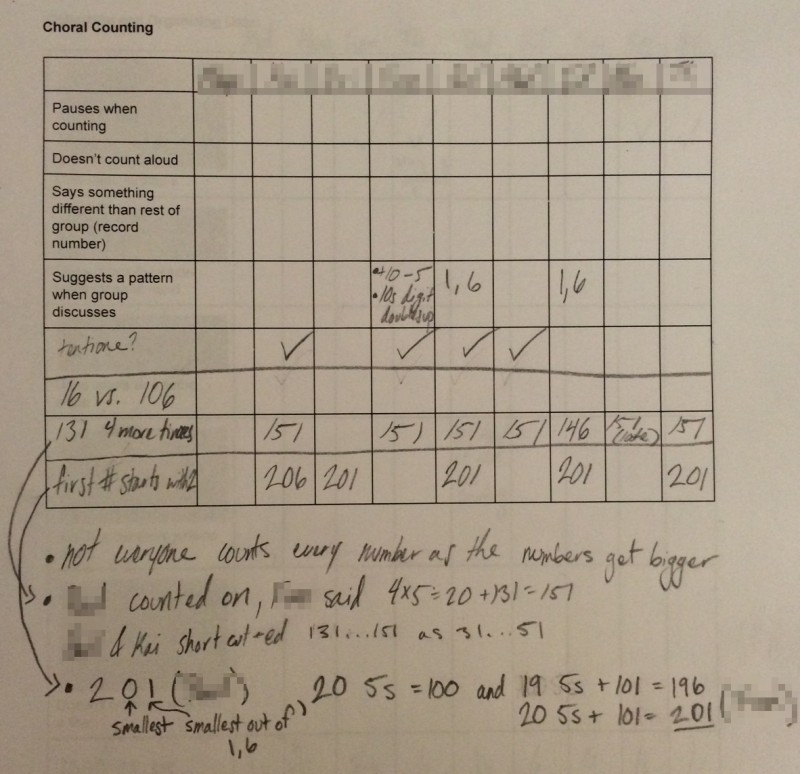 Although the activity went longer than I expected, it was incredibly rich and worth doing.