I participated for the first time a couple of days ago in this #edchat phenomena happening on Twitter.  Basically the idea is, everyone heads to the search page on Twitter and starts having a conversation through Twitter using the hashtag #edchat.  The resulting conversation is recorded and has many people who can listen in on the conversation, and everyone is free to jump in if they want.

The Wordle (created on http://www.wordle.net) below is the result of our conversation topic – motivating students. 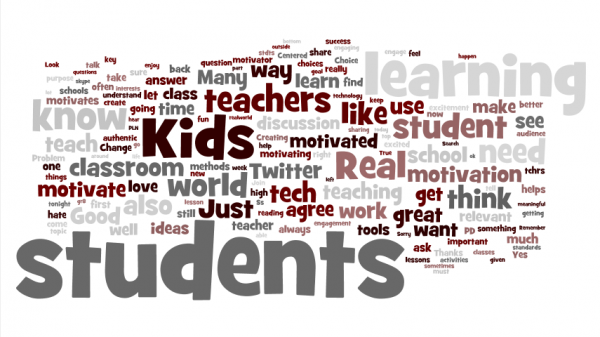 The reason why we used Twitter for our conversation is less obvious I suppose.  We could have had a similar conversation using forum software or one giant chat, but both of these have drawbacks.  First, a forum is an asynchronous form of communication with significant delay between comments.  Twitter is a much faster mode of communication, and the ability to refresh to see more results in the search engine makes using Twitter closer to a real conversation speed.  Twitter beats a chat application largely because you can follow the participants of the Twitter chat after the conversation, and a permanent(ish) record of the conversation continues to exist on Twitter for other people to find (and possible join!).

This conversation was fun and engaging and involved over 110 participants and over 800 comments made.  That’s pretty impressive, and definitely shows me that Twitter is a very useful tool for personal professional development and collaboration.  When was the last time you had such an organized conversation with so many people?