Thanks to Daniel Rezac of Edreach, there is a list of all of the tweets that happened for the ISTE (International Society of Technology in Education) conference that happened last week.

From Daniel’s spreadsheet, I’ve created a list of the 2900 people who tweeted using the #iste11 hashtag during the conference. You can download it here in comma separated format.

Using Tagxedo, I’ve created a word cloud from the tweets. 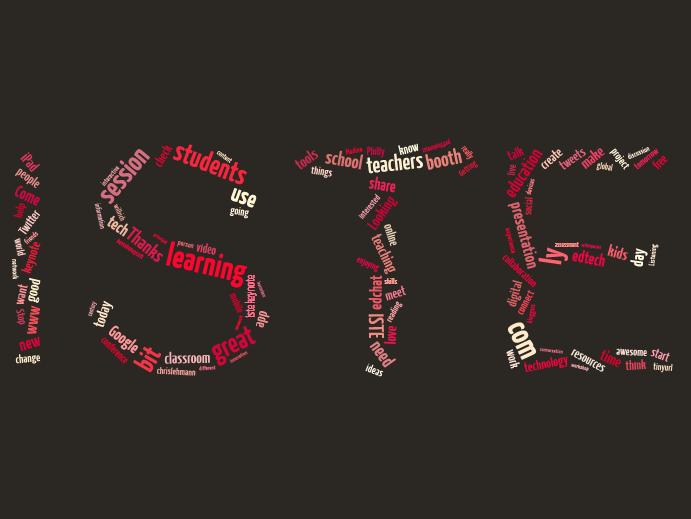 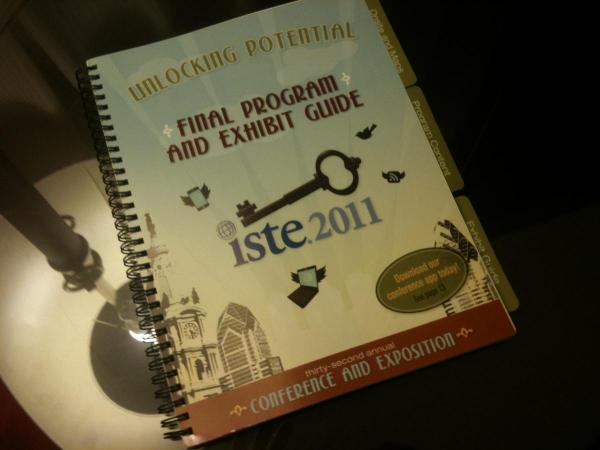 I just thought I’d share some numbers around just the conference planner, which I’m picking on because it is easy to quantify, but believe me there are plenty of other examples of waste here at ISTE. The ISTE conference planner is about 110 pieces of paper. Each book is about 30 cm long by 20 cm wide. There are about 13,000 people at ISTE. Each of them received a planner.

If you lined up the pages from the conference planners end on end, they would be about 429km long, about the distance from Cleveland to Philadelphia.

If all of the conference planners were put on a scale, they would weigh just over 6 metric tonnes (6000kg).

15 adult trees were chopped down to make all of the conference planners for this conference. 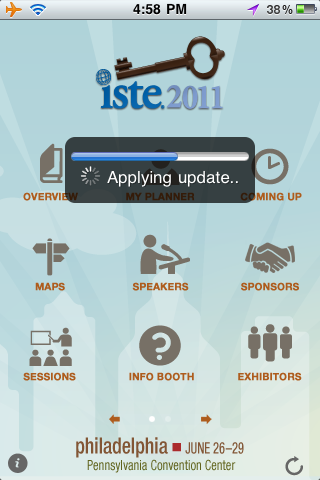 The weight of the apps themselves is 0.

You can’t line up apps.

You do need everyone to have a mobile electronic device of some sort, which raises other environmental questions, but at least those devices have multiple uses, and can replace many, many other paper resources.

Let’s try a different system for next year. Why don’t we use an opt-in system for the conference planners?

How many people would have turned down the conference planner if they had the choice? 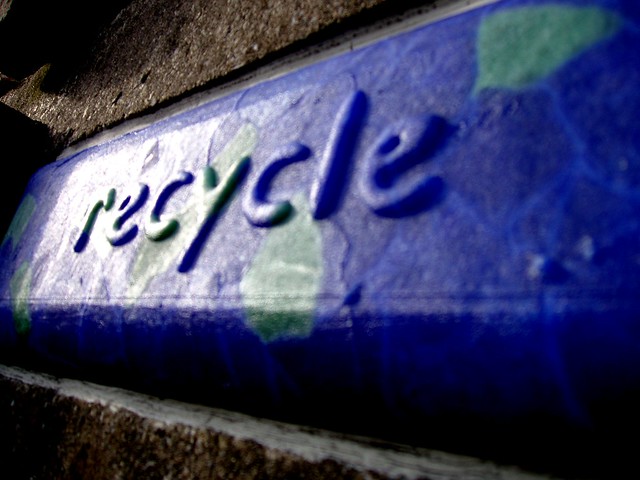 Last year at ISTE, I saw a lot of waste, and I feel like we should be able to run a greener conference this year. Here are some recommendations.

First, take advantage of the watering stations.  If you are planning on attending ISTE, bring a water bottle (or two). Make sure to fill up your water bottle rather than using the disposable paper cups, or even worse, plastic water bottles. You need to be hydrated, but you don’t need to be producing extra waste. In fact, you could bring your own utensils and a plate as well, and rinse these off in the bathrooms so that you don’t have to throw away paper or plastic plates.

Next, participants, please avoid vendor hand-outs. You aren’t going to look at them. Use your electronic device, and take pictures, or take notes instead. Take the time to get the contact information on the vendors whose products you are really interested in exploring further, and say no thanks to their brochures. Vendors, please learn about QR codes. Provide short urls to resources which are deep-linked if you must, but don’t be fooled into thinking that your little pieces of paper are useful; they aren’t.

ISTE organizers don’t give every participant a copy of the program guide to look at.  Post maps at strategic places within the venue itself, and your already out-of-date schedule, is up already in electronic form on the ISTE conference website.  This is a technology conference, use the technology effectively! Demonstrate best practices.  There were hundreds of laptops with internet connections set up all over the place; these could have been better utilized. Again, nearly every participant will have a portable electronic device with them. Instead of your newspaper, use a blog on the website with an RSS feed.

Everyone at the conference should put their devices to sleep when not in use. The power output at ISTE will be enormous, and given that in the United States some of this power comes from coal, it behoves those of us involved to be aware of our power use. The ISTE laptops, while useful, should go to sleep, with instructions beside each one available so that people know they can wake them up from hibernation mode and use them. The LCD projectors that nearly every vendor feels like they need to use are expensive in terms of power use. Vendors, your products aren’t more likely to sell because you have a flashy presentation, they  will sell if they are useful.

What are some other things we can do to run a greener conference?

Update (2011): This absolutely as relevant for the 2011 conference as it was for last year’s conference.

First, I want to preface what follows with the stipulation that although I had the complaints listed below, I really, really enjoyed attending ISTE and will attend again.  I’d just like the conference to be more environmentally conscious.

When I attended ISTE this year, I was overwhelmed by the size of the convention center.  I walked around the entire place and just couldn’t believe how big it was and how many people there were attending.  According to a Tweet I read on Twitter, there were over 12,000 people in attendance.  After I looked around the conference I realized what a huge amount of waste must be occurring every day of the conference.

First there were the watering stations.  This was a great idea, with poor execution.  The idea was that we should fill up our water bottles at these stations, but every single station also had hundreds of paper cups available, which I saw people using often.  Every person at the conference could have been given a water bottle at the beginning, instead of the only 2000 which were handed out, and a sign could have been put up at the watering station directing people to go pick up their water bottle and refill it.  Perhaps by the end of the conference some of the people who had not previously been using reusable water bottles would get into the habit as an added bonus!

Next, every vendor had hoards of paper to hand out to people who attended.  This is a technology conference! People who come have internet access. Next time either give people a little card with an web address on it, provide QR codes so people can access the website directly with their smart-phones, or at the very least scan people’s ids (which all had barcodes) and promise to only send 1 email with the same information in PDF format.  The amount of paper wasted in this way was staggering, it must have been a few dozen sheets per person at least, which would mean well over 150,000 sheets of glossy color paper were given to attendees.

The ISTE organizers gave every participant a copy of the program guide to look at.  This included maps, which could and should have been posted up at strategic places within the venue itself, an out-of-date schedule, which was already in electronic form on the ISTE conference website, and a daily newspaper.  Again, this is a technology conference, use the technology effectively! Demonstrate best practices.  There were hundreds of laptops with internet connections set up all over the place; these could have been better utilized.

The food at the conference center was pretty horrible.  I mean, it was bland, boring, and tasteless.  When I went to a Thai restaurant on the last night of the conference (for reference Spicy Basil near 1st avenue and Broadway), I recommended that they contact the conference center and offer their services.  I was serious! Food which is bland and tasteless tends not to be eaten and this results in more waste.  Around the convention center there were various “free food” stalls set up, which was great, but I know that much of this food went straight into the trash later.

It seemed like the hundreds of laptops, which were set up for participants use, and all of the other electronic devices set up around the building were set on "always on" mode.  Everywhere I looked there was another screen blaring at me.  I put my laptop to sleep when I’m not using it, and it saves the battery because it uses a lot less power.  The amount of power a single laptop uses is not a huge amount, but hundreds of laptops around the convention center, and dozens of LCD projectors focused on interactive white boards, combined with dozens of television screens, all on for 4 days straight, has got to make an impact on the energy consumption of the building.

Our role as educators is not just to find examine our teaching practices.  As role models for our students and our communities we must examine our daily practices outside of school as well.  Technology is a terrific tool, but we must not forget that our planet is being overwhelmed by greenhouse gases and pollution and whatever little bit we can contribute to solving this issue is important.

Let’s try and run a greener conference next year, shall we?