Thanks to @rmbyrne and his Free Technology for Teachers website, I just saw Annie Lenox’s "The Story of Bottled Water" video which is recommended viewing, but chances are those of you coming to this blog know the story she’s telling already.

In the video, she talks about the process of manufacturing demand, in which a company uses advertising to turn something people don’t need, into something they do. I thought about what she said, and agreed that I myself own many things that I almost certainly do not need. I also thought of the parallel process that is happening in the United States.

Right now educators, parents, and students are being sold a myth of an education system in crisis. By all standards, nothing has changed in education in 40 years across the US, so why is everyone in so much of a panic to change the system? While no one can claim that the US public education system is perfect or isn’t in serious need of improvement, to imply that we should be in a state of panic is at best irrational. When people panic, they will grab at any solution which seems plausible. The US public are being sold a lie, a false-hood, and the solution to the problem all at once.

The US President’s state of the union was fairly uninteresting according to accounts I’ve read because he really said nothing new on education. I didn’t watch it, but he had a pretty simple mesage according to the commentaries I’ve read. "We must do better because we are being beaten. We must do better because the American school children do better." Attached to this message is Race to the Top which encourages charter schools, teacher accountability through standardized testing, and national curriculum standards.

The question you should ask is, if I wanted to change the US education system to be more privatized, how could I convince the US public that this is necessary? Oh right, we’ll just do what we did with the Gulf War, we’ll manufacture a reason why there is a problem, and then provide the solution at the same time, and imply that the only solution lies with greater accountability of teachers.

By implying that teachers are the problem, the US DOE has managed to drive a wedge between teachers and their long time supporters, the parents of the kids they have in their classroom. "Can we trust this teacher," a parent will think, "or are they just trying to save their job?" While fortunately most parents seem to continue to be satisfied with their schools, it is only a matter of time before their (the reformers trying to change the system) message gets through. "American public schools are in trouble and we know the solution."

I don’t see the US system as being entirely in crisis. What I see is a lot of dedicated individuals who are working in a system for a world which needs transformation. I see a lot of educators who like what they do, and would be happy to work differently, but are trapped by the imposed bureacracy around them. I see a system which is failing a lot of students because of its lack of flexibility and inability of US politicians to solve the problem of poverty within their own country.

Instead of the greater accountability movement being pushed on US public education, schools actually need more freedom to pursue an education for children which would actually work. If we think about Zoe Weil, and her work for an education system dedicate toward building a more humane society, we might wonder where that would fit in our current educational model. Could it fit within the greater accountability model? Or would we need to rethink schools completely?

What is it about these people that make them think they can bamboozle the US public so completely? Oh right, because they’ve done it before.

Update: Just so people don’t think I’m making this up, check out this post about how little data these decisins are based on.

Why is individualization in education so important?

Tonight I was at a birthday party for a young boy; I was invited as a result of my son being about the same age as the birthday boy.  While we were dolling out the ice cream and cake for the 5 boys at the party, I was struck by the realization that there was a relationship between their choices for ice cream and cake, and how we need to look at education.

Here’s what each boy wanted for this ice cream and cake.

What I noticed is that each of these boys, who ranged in age from 3 to 7, chose a different style of ice cream.  Already, by the age of 3, these kids had preferences about what types of ice cream they wanted, whether or not they wanted chocolate syrup with it, and how much cake (if at all).  These boys are all very different already.

The assumption that each child’s education has to be the same irks me to no end because I know that every child is different.  Nothing is more clear to me from this simple example that these children are individuals from a very young age, and as such they need to be treated differently; they need to have their needs met.

More than at any other time in history we have the ability to personalize learning for every student, but we keep moving toward standardized curriculum, externally moderated work, and increased accountability in the minutia of what we do as educators.  It is time to recognize that our students need more than this because if keep giving them all the same education, we will keep seeing some of them choosing not to participate in our system.

Today’s #edchat on Twitter was about how we can break free of the echo chamber that is #edchat.  We all have great ideas, but how can we turn those great ideas into action?  Our objective is not to stop our great conversations but to also move beyond our conversations into concrete action.

Here’s a great blog post with a summary of the different ideas from the night, as well as the perspective of the author, Matt Guthrie.  I don’t want to repeat what he says, but his post is totally worth reading.  The summary of the entire chat is here.

There was some action taken tonight, which I hope sees enough follow through to be useful. For example, one member of #edchat started a wiki where we can gather together our successes and failures in the area of educational reform.

I started a document to help organize a standard argument we can use to bring down the Internet filters at our schools.  The objective with this document is to share our individual arguments for why Internet filters are ineffective.

Another suggestion from @TeacherReality is to create local teacher "think tanks" which are linked to our national or international teacher organizations.

What other concrete steps toward educational reform have you see that were a result of one of our conversations on #edchat?

The Relationship Between Accountability and Creativity

Imagine this graph represents the possible relationships between accountability and creativity. 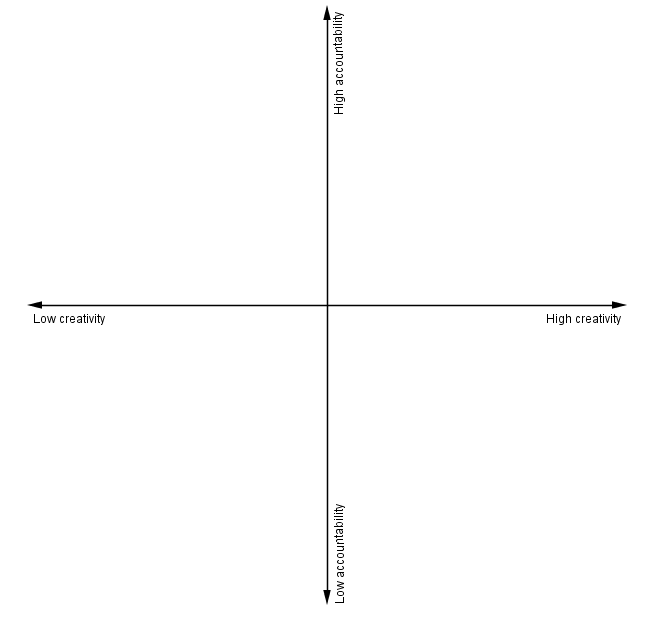 Where would you put the activities you do as a school?  Here are some examples of activities some school do, and where I think they lie on the accountability vs creativity scale. 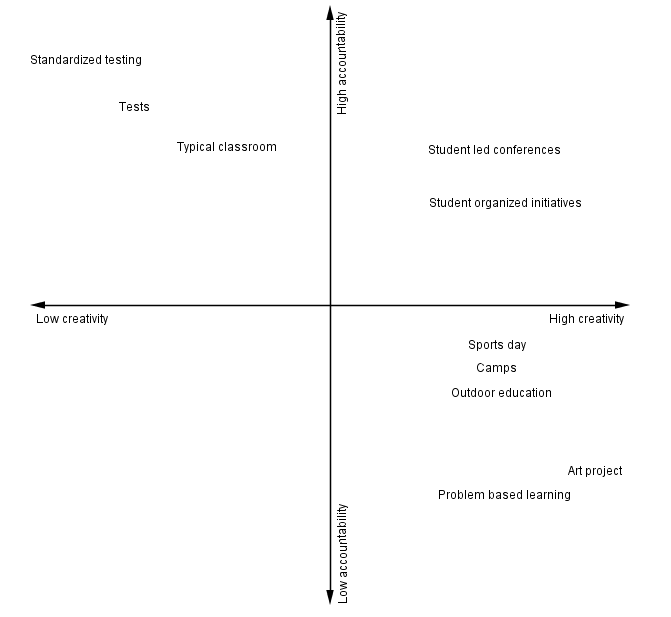 What you may notice about this graph is that, for the most part, activities which hold schools and students highly accountability are not associated generally with creativity and that activities which are highly creative can fall short of being very accountable.  It’s not a perfect graph, and I think that some of the examples could be moved, but the idea I think is pretty clear: the more you increase accountability, the less flexible the activity, and hence the less ability for students to be creative while completing the activity.

Accountability in this sense means how the activity and the student’s performance of that activity, is shared with the student, the teachers, the school, and the wider community.  Standardized tests are considered a "highly accountability" activity simply because everyone has access to how well pretty much any school did, and educators within those schools generally have access to their individual marks, and of course students get feedback about how well they did.

Creative activities to me are generally areas where the student has a lot of choice on how the activity will be completed, and how they will complete the activity.  These are often the types of activities that I think students will actually be able to do once they finish their education, and according to Sir Ken Robinson, our schools fail to provide opportunities to students to do them.

There are a few activities which fall with higher accountability and decent ability for students to be creative, and we often find that these activities are not ones which are done by most schools.  Anyway, I’m sure the model I have up there is imperfect, so I invite you to follow this link to this collaborative Google drawing I’ve started, and we can add other activities to this chart.

Personally I believe schools are in need of deeper reforms than simply changing the pedagogy a bit can resolve.  Here are some suggestions I’ve been exposed to over the past few weeks, which could be considered radical, but might really improve schools.  I’d like to provide references for where I learned about this information, but to be honest I’m not really sure who exactly suggested what, I’ve been processing a lot of information recently.  I’m pretty sure some of this is from Don Tapscott,Gary Stager, Alfie Kohn and Joe Bower.

Maybe these ideas are too radical for the current school system, and I suspect that some of them would lead to revolt from our parents, not because I don’t think they would work, but I recognize that they are very different from what most of experienced when we went through school.  However, if we all look back at our own schooling, I’m sure we remember hardly any times when we really enjoyed what we did in class, but we can all remember those courses we took which did nothing for us.  Why are we subjecting our students to an even worse experience than we had?